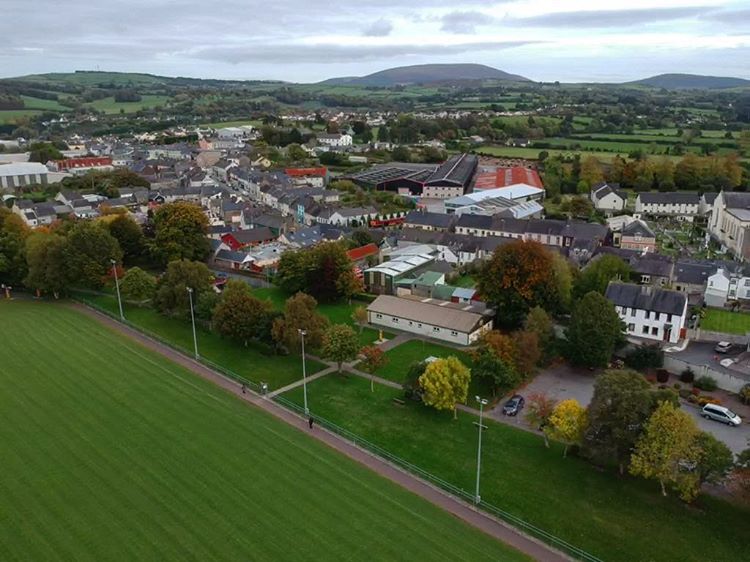 Above: Millstreet from a quad-copter over the Town Park, as Mushera dominates the horizon. This week’s In Pictures has photos of sport, landmarks for sale, of mountains, of Dromagh, from the Community School … as well as videos of Millstreet from the air, singing, and rallying … and a bot more with it :

Video: Views of Millstreet from a Quadcopter over the Town Park

A visitor to Dromagh Castle earlier in the year

Had a very busy day today. Visited Dromagh Castle, the castle built and defended by the O'Keefe's, then kissed the Blarney Stone at Blarney Castle, went down to Old Head at Kinsale, the rocky outcrop which was once the seat of the King of Munster and is the closest land to where the Lusitania sank in 1915, then on to Lough Gur to see the New Church built in the 15th century and the Grange Stone Circle, the largest standing stone circle in Ireland, dating to 2,000 BC. #Ireland #Irish #OKeefe #LoughGur #Blarney #Castle #Lusitania #OldHead

Cork 20 Highlights by Bernard, include some from Mushera

End of season party for Duarigle Gaels U6,7,8,9

Parents went all out again for Duarigle Gaels U6,7,8,9 party today
Thanks so much
Let the madness begin pic.twitter.com/0sjyVxwt8n

Picking up their certs from Millstreet Library

Photos from the CIT Engineering Roadshow at Millstreet Community School

A beautiful Thursday morning in Millstreet

Another prize for O’Leary’s Butchers, this time in Dingle

One of Dennehy’s trucks

The old Coláiste Padraig is for sale

This is not the first time we’ve seen this happen on the pitch in the Town Park!!! The last time was in 2014, and it was much worse