The Rev. Thomas Anthony Dennehy, a priest of the Archdiocese of Miami, was among the founders and builders of St. Brendan Catholic Church in Homestead (sic) and Cardinal Gibbons High School in Fort Lauderdale.

“He was very much committed to education of youths,” said Msgr. Vincent Kelly, who worked with Dennehy at Cardinal Gibbons High for a few years.

“He helped in the physical construction itself,” Kelly said.

Dennehy died April 10 near his hometown in Glanmire, Ireland, of a heart attack. He was 65.

Born at the Hollow, Drishane Rd., Millstreet, County Cork, on April 11, 1934, Dennehy studied philosophy and theology at All Hallows College in Dublin. He was ordained a priest in 1958. From Ireland, he was assigned to the archdiocese in St. Augustine ; there was only one archdiocese at the time.

Dennehy’s first assignment was to teach at Christopher Columbus High in Miami. After that, he studied school administration at Catholic University of America in Washington, D.C., where he received his master’s in education.

For 35 years, he served the archdiocese as a priest and educator. His first class at St. Brendan High started with approximately 400 students in 1975; by his retirement in 1993, the school had more than 1,100.

“He had tremendous conviction and influenced many young students, men and women who credit him for much of their success,” Kelly said.

Dennehy is survived by a brother, Denis, of Dublin, and a sister, Noreen Monaghan, of Melbourne, Australia. 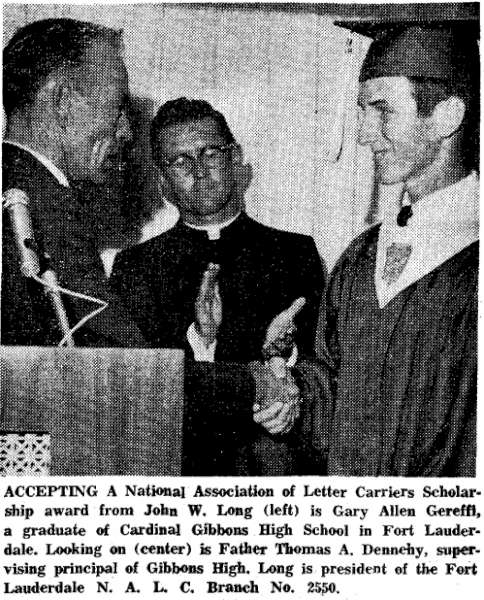