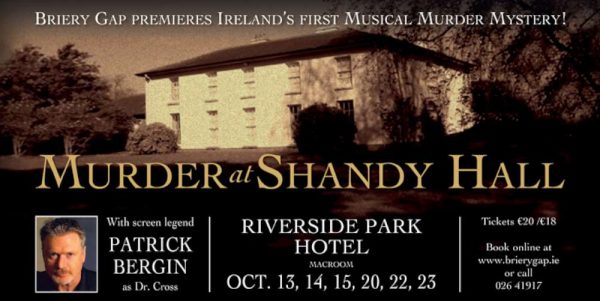 Briery Gap is proud to announce that this original musical at Riverside Park Hotel will star screen legend Patrick Bergin in the role of Dr Philip Cross and will involve director Michael Sheridan, musical director Alan Kiely with production by Briery Gap.
COUNTY CORK JUNE 1887.
Against the tranquil rural backdrop- the sleepy County Cork village of Dripsey near Coachford- a sensational Victorian murder is played out with a potent mix of love, lust, betrayal and ultimately naked hatred. The entry of a young and beautiful governess into Shandy Hall, the home of retired British Army surgeon Dr Philip

Cross acts as a catalyst for an act of horror that prompts suspicion, an exhumation and a charged courtroom drama that grabs newspaper headlines all over the world.
The cast of real characters includes a cruel killer cloaked in respectability, a beautiful and naive governess; a blameless wife; a brilliant young pathologist; a canny and clever murder detective; two accomplished courtroom adversaries; a caring judge and a notorious hangman. In addition there is a myriad of supporting cast of servants, villagers, neighbours and witnesses in the investigation and trial underscored by great songs and music.
Michael Sheridan’s best- selling book Murder At Shandy Hall has been adapted to the stage by the author with music and lyrics by local singer- songwriter Alan Kiely and Cork native Kevin Connolly with the support and encouragement of Briery Gap artistic director Ann Dunne and the board of the iconic arts centre. The concept was developed by Alan Kiely with the intention that the musicians and cast would be drawn from the very locality in which the real life story was set and to bring to life a drama with universal themes which was embedded in the history of the area.

Performance will take place on Thursday October 13th, Fri 14th and Sat 15th with a further three on Thurs 20th, Sat 22nd and Sun 23rd of October with an 8:00pm start on each night. This production promises to be one of the greatest theatrical events Macroom has ever staged, don’t miss out!

As prequel, the briery Gap will also be screening Patrick Bergin’s film “Sleeping with the Enemy”, with Patrick having a questions and answers session afterwards. it’s happening on October 3rd: