Last week I was browsing photos from the (now) high resolution Lawrence Collection and I was wondering about the identity of a man who appears in one photo outside the front door of Millstreet Church in the early 1900’s (soon after the death of Canon Griffin in 1899, and before his headstone was erected): 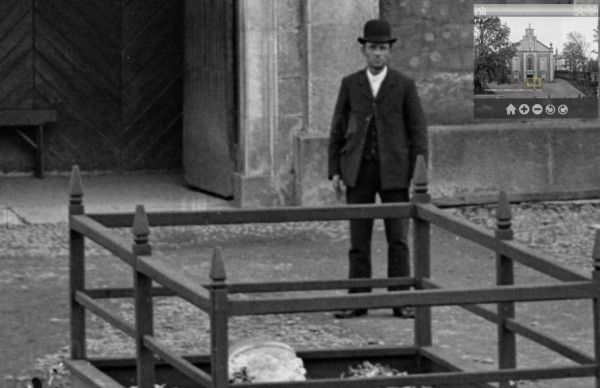 … then I noticed that he’s also in the Lawrence photo of the Presbtry: 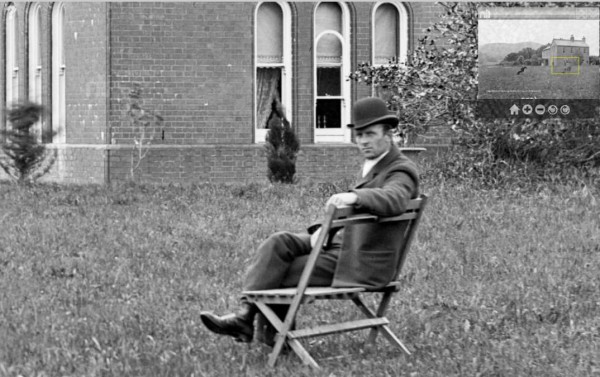 [full photo of the Presbytery here]

… so I was thinking maybe he was a priest, but then the other day I just noticed him by accident in a 1912 photo of Millstreet people in Picture Millstreet (front row, second from left), and he’s named as John Murphy, Parish Clerk from the West End, better known locally as Jack the Clerk. 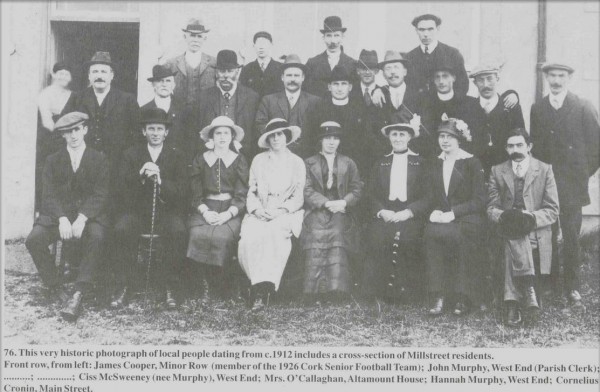 While not a man of many riches, he was well thought of by everyone. It is said that he was a very mild mannered man although nobody’s fool !

He married Catherine (Lily)  O’Shaughnessy (granddaughter of Jeremiah Hegarty), eleven years his junior on Valentines Day 1914. After their marriage Jack and Lily moved in with John’s mother Johanna and his sister Norah (seen in the 1912 photo above) at 3 West End, and on the 1st June 1915 their first child Johanna (Jo) was born. She was the first of seven children Joanne, Ellie, Michael, Mary, Margaret, John Gerard and Noreen Gertrude. Jo, the oldest was the last to pass away in 1996. All but Ellie spread their wings and spread around the world. Ellie would be well known to many of us as she had the shop at the home place across from the church (with her sister Margaret until 1957). Ellie passed away in 1989.

Jack’s wife Lily died suddenly in 1939. His son Michael was killed in a car accident in Singapore in 1956, and this had a bad effect on him and Jack the Clerk passed away 7th October 1957. May he rest in peace.

Just a piece of my own, growing up I only ever knew Ellie her as Ellie Clerk, thinking that was her real name! I used to wrangle a few pence from my dad after mass every Sunday to get some sweets, which would last much of the week. The little things that kept us happy as children 🙂

Where are the Clerk’s buried?

“I remember Johnny the Clerk when I was in school in the 1960s. Lived in West End. The job clearly continued in the family” – Ann Lane on twitter

@millstreet_town Thanks for sharing https://t.co/Ki4b9IZdwe Jack the Clerk was my paternal grandfather. #familytree #genealogy #Census2021

6 thoughts on “Jack the Clerk”