WAR MEETING AT CARRIGANIMA: A successful meeting was held at Carriganima last Sunday (13th February 1916) in furtherance of Lord Wimborne’s recruiting scheme… During the progress of the meeting a number of young men, who were said to have been members of the local corps of Irish Volunteers marched past the meeting, and after having gone about one hundred yards disbanded, when the bulk of them returned and joined the crowd, listening until the proceedings concluded.

Halfway between Macroom and Millstreet, Co Cork, Carriganima was the intended rallying point for hundreds of Irish Volunteers from Cork city and county on Easter Sunday, April 23, 1916. The plan was for them move early on Monday to disrupt military attempts to stop German guns being brought by rail from Kerry on the line near Rathmore and Millstreet. Although the plan was deemed pointless when the arms landing was foiled days earlier, almost 500 Volunteers marched to Macroom and Carriganima.

This article appeared in the Cork Examiner 100 years ago today (Wednesday, February 16th, 1916) 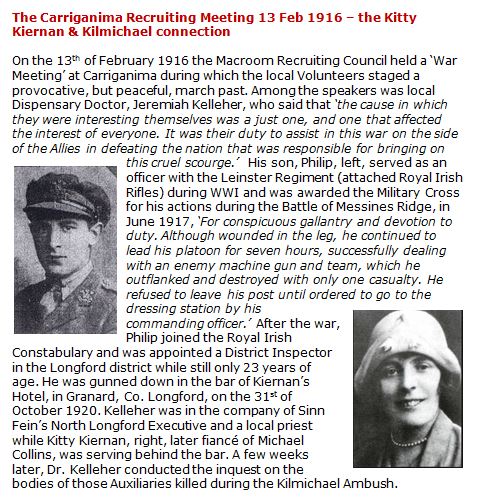