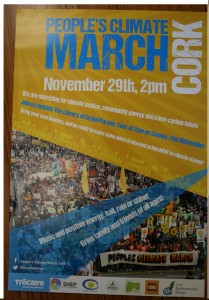 A number of organisations, including Trocaire have organised a march to mark the beginning of the Climate Change Conference (COP 21) which will begin at the start of December 2015 in Paris.  It will be the largest gathering of world leaders for such a gathering.  Among the aims of the conference is the agreement on legally binding targets for all countries to adhere to with regards the level of carbon emissions they are responsible for.  Marches will be taking place in Dublin, Belfast as well as Cork on Sunday 29th November to show the leaders attending the conference that ordinary people want them to set these targets and to take meaningful steps towards counteracting the causes of global warming, the effects of which have a particularly devastating impact on poor communities in developing countries.

This is a reminder that the People’s Climate March in Cork City will begin at 2pm on Sunday 29th November where the Grand Parade and Oliver Plunkett Street intersect.  It’s an event for all ages.