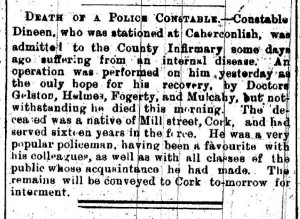 —-
Death of a Police Constable. – Constable Dineen, who was stationed at Caherconlish (Co. Limerick) was admitted to the County Infirmary some days ago suffering from an internal disease. An operation was performed on him yesterday as the only hope for his recovery, by Doctors Gelston, Helmes, Fogerty, and Mulcahy, but not withstanding he died this morning, The deceased was a native of Millstreet, Cork, and had served sixteen years in the force. He was a very popular policeman, having been a favourite with his colleagues, as well as with all classes of the public whose aquaintance he had made. The remains will be conveyed to Cork tomorrow for interment.

Intriguingly, no first name was given for the RIC Constable.

7th Jan 1897, Constable Dan Dineen was a witness to a stabbing case at the petty sessions court in Rathkeale

2 thoughts on “Death of Constable Dineen”