END_OF_DOCUMENT_TOKEN_TO_BE_REPLACED

Listen to the Match Report below by John Tarrant on C103 Sport (please note that there is a break in the audio from 2:06 to 2:19)

END_OF_DOCUMENT_TOKEN_TO_BE_REPLACED 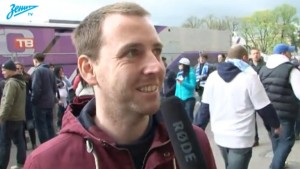 Kenny Cremin was at the Petrovsky Stadium last weekend to see his local side Zenit St.Petersburg clinch the Russian League for the fourth time.

He was was interviewed by Zenit TV where he was asked about the football, the food, the drink, and the language.

It’s hard to see anything other than a Yes vote in the Marriage Referendum, especially if younger voters turn up at the polls, but stranger things have happened. Now does anyone know how the Age of Presidential Candidates Referendum will end up? END_OF_DOCUMENT_TOKEN_TO_BE_REPLACED