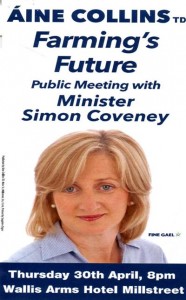 This year has seen some major developments for farmers, farm families and farming communities. The ending of Milk Quotas and the opening of the USA market for beef has the potential to offer real gains for rural Ireland.

I’d like to invite you, your family, friends and neighbours to meet our Minister for Agriculture, Simon Coveney in The Wallis Arms Hotel. Come along, have your say and hear his thoughts on the future of the family farm and the agriculture sector. I hope you can take the time and join us on the night.

I look forward to seeing you!

Simon Coveney TD was appointed as Minister for Agriculture, Food and the Marine, by An Toaiseach in 2011. In 2014 he was also appointed as Minister for Defence. In 2013 Simon chaired the EU Council of Agriculture & Fisheries Ministers. He successfully manages the reform package for CAP during the Irish Presidency of the EU.
Simon was elected to the European Parliament in 2004 and is a former member of Cork County Council. Born in Cork and representing Cork South Central he holds a degree in Agriculture and Land Management.