Easter 2015 is just gone, but here’s a look back at the Easter Ceremonies in Millstreet 99 years ago, and how different it was: 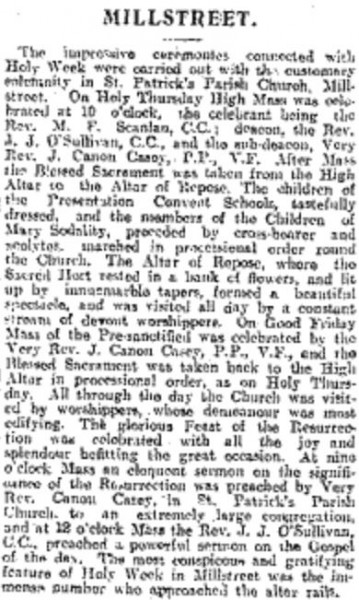 The impressive ceremonies connected with Holy Week were carried out with the customary solemnity in St.Patrick’s Parish Church, Millstreet. On Holy Thursday High Mass was celebrated at 10 o’clock, the celebrant being the Rev M. F. Scanlan, C.C.; deacon, the Rev. J. J. O’Sullivan, C.C, and the sub-deacon, Very Rev. J. Canon Casey, P.P., V.F. After Mass the Blessed Sacratment was taken from the High Altar to the Alter of Repose. The children of the Presentation Convent Schools, tastefully dressed, and the members of the Children of Mary Society, preceded by cross-bearcer and neolytes (sp?) . inarched in processional order round the Church. The Altar of Repose, where the Sacred Heart rested in a bank of flowers, and lit up by innumerable tapers, formed a beautiful spectacle, and was visited all day by a constant stream of devoted worshippers. On Good Friday Mass of the Pre-sanctified was celebrated by the Very Rev. J. Canon Casey, P.P., V.F., and tho Blessed Sacrament was taken back to the High Altar in processional order, as on Holy Thursday. All through theo day the Church was visited by worshippers, whose demeanour was most edifying. The glorious Feast of the Resurrection was celebrated with all the joy and splendour befitting the great occasion. At nine o’clock Mass, an eloquent sermon on the significance of the Resurrection was preached by Very Rev. Canon Casey, in St. Patrick’s Parish Church, to an extremely large congregation, and at 12 o’clock Mass the Rev. J. J. O’Sullivan, C.C, preached a powerful sennon on the Gospel of the day. The most conspicous and gratifying feature of Holy Week in Millstreet was the immense number who approached the altar rails. (Cork Examiner 26th April 1916)

What i found interesting about the paper of that day (Wednesday 26th April 1916), was that I could not find one mention of the Easter Rising which had begun in Dublin two days previously (Easter Monday 24th April).  In fact the events were barely mentioned for a few days as  information was hard to come by, until the events were properly reported on May 1st