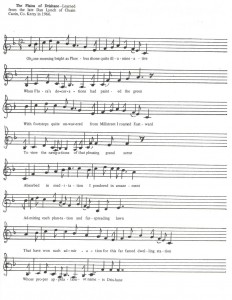 Oh one morning bright as Phoebus shone quite illuminative
When Flora’s decorations had painted the green
With footsteps quite unwavered—from Millstreet I roamed Eastward
To view the navigation of that pleasing grand scene
Absorbed in meditation—I pondered in amazement,
Admiring each plantation and far spreading lawn,
That have won such admiration for this far famed dwelling station,
Whose proper appelation—or name—is Drishane.

There’s a mill for grinding corn and an engine ploughing the farm,
Fine oxen that are stall fed, the largest to be found:
And the yard resounds with screech of guinea-hen and peacock.
The swan upon the lake and he sailin’ all around.
The lime-kilns are kept blazing with columns most unsparing,
While to distant lands reclaiming the same has been drawn:
And quarrying operations with loud reverberations,
But harmoney’s prevailing through the plains of Drishane.

And her trees they are the fairest and the loftiest in the nation—
The branching oak most stately, it grown there in its prime.
The sycamore adjacent, the ash no less inferior,
The fir so elevated and the shady black pine.
The apple tree in season, the cherry in rotation:
The laurel green, the hazel and the far spreading palm.
With the height of emulation they’re all growing quite spontaneous—
Those green fields decorating round the plains of Drishane.

And the castle is most famous, it’s a tower that’s built so ancient
Upon a solid basis most permanent and sound.
It has baffled molestations and Cromwell’s aspirations,
Though other towers were taken or levelled to the ground.
From its summit elevated you can see the Reeks so famous,
And the Galtees tho’ far eastwards their shape it may be drawn,
Likewise the peaks of Mangerton and many other places,
All meriting great praises for this place called Drishane.

And the strangers from all quarters while passing through her borders,
Along by the Blackwater to Killarney by train
All ponder in amazement whilst on it they are gazing,
And their footseps east retracing they may view the same again.
Those benevolent grand strangers all boasting of its praises,
In all these foreign places, Spain, Germany and Gaul,
And with kindest approbation they candidly declare that
For grandeur it has taken the sway from them all.

from the Comhaltas Archive

Does anyone know when this is from ? or who wrote it?

The Plains Of Drishane, gives an idea of how well Wallis did out of the Famine. Wallis personified the system of government and the land system that caused the Famine. He had got Drishane as a Cromwellian, and kept it subsequently. A Major Wallis led the left wing of Broghil’s army, the infantry, at the battle of Knockbrack (see Spotlights On Irish History, 1997, Aubane Historical Society, for further information on this complex bit of history). It is likely that it was then that a Wallis first saw the attractions of Drishane. Wallis did his bit for Broghil after Knockbrack by burning alive those who had fled to Dromtariffe Church, mainly women, children and older people. Only one survived (by using a tunnell) to tell the tale, and the number massacred have been put at up to two hundred. Kilcorney Church, the ‘Old Chapel’, was also burned down and the curate killed.
Wallis increased his lands considerably in 1728 by becoming a ‘Protestant
Discoverer’, and thereby using the Penal Laws to get more of the McCarthy lands for £450, while the family was arguing over a will. Reputedly, the widow McCarthy was left freezing on her doorstep as a result. He later acquired most of the town of Millstreet by loaning money to McCarthy-O’Leary and tricking him into a bond which he foreclosed on. Thus he acquired everything from the ‘Bridge’ to Drishane.
The Wallis family was prone to boast of its generosity during the Famine in that it allowed starving people eat its turnips in the field—but it also ensured that none were taken away—that remained a criminal offence! It seems the family expected people to be eternally grateful for that. Another landlord, Jeremiah Eugene McCarthy, named in the tithes list for Aubane above, is reputed to have killed people eating his turnips by setting his dogs on them.
I think it was a wonderful irony that the great and the good, nationally and
internationally, planned to make Drishane the culminating venue for events
commemorating the 150th anniversary of the Famine. At last, the Famine would have come to Drishane. That plan was dropped.
There was great care taken not to give the impression that they were in any way
seen to be celebrating the Famine—that would be in terrible bad taste, but a
celebration of the Famine would have been very appropriate indeed in the case of Drishane. Drishane did well out of the Famine the first time around and it would have been entirely appropriate that it did well out of it the second time around!

2 thoughts on “Song: The Plains of Drishane”