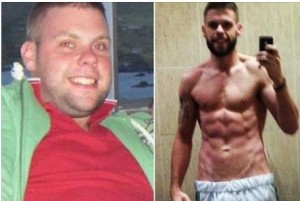 A huge congratulations must go to Colin Mullane from Rathcoole, who lost an amazing six stone as he transformed his lifestyle and his body in the past year. There’s lots of us that could take inspiration from his efforts.

His story has gone viral since it was broken first by the Irish Mirror on Jan 9th, and has been taken up by lots of newspapers (Irish Mirror, the Mirror, RSVP , Celeb News …) and radio stations (RedFM, C103…).

Listen below to the audio of his interview with Neil Prenderville of RedFM (from 9:25 to 20:35), and he will be interviewed by Patricial Messenger on C103 on tomorrow Wednesday Jan 14th (Now added below).

Here is the extract from the Irish Mirror:

Colin Mullane, 25, shed an incredible 5st 11lb in just a year after an unusual Christmas gift gave him food for thought.

He told the Irish Mirror: “My parents bought me a membership for the gym and it was really a kick up the arse.

“It was a wake-up call and showed me I needed to get my arse into gear.

“Out of my group of friends, I was always the chubby friend. Now they call me fatboy slim.”

The Cork man dropped from a hefty 16st 11lb to a lean 11st after making a complete lifestyle overhaul.

Colin said: “I went to the gym straight away and got a fitness and healthy eating plan drawn up and I just stuck to it.

“The change of diet was a big part of it – I was eating all the wrong things.”

He revealed his buff bod is down to a gruelling exercise regime and sacrificing hearty home-cooked meals in favour of a strict diet plan by Galway-based fitness coach Brian Keane.

Colin added: “I had tried losing the weight loads of times before. I was in Australia and dropped a few stone, but when I came back home and started eating Mammy’s dinners again I put it all back on,” he confessed.

“I train five days a week now and I do it because I really enjoy it. It’s really been a lifestyle change.”