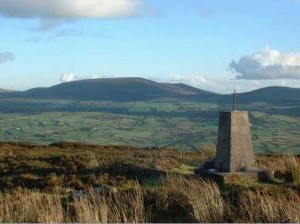 An old local saying about the weather locally:

(‘Fog on Mushera and Claragh bare – the best sign of good weather in the world’).

An extension of this is:

Essentially the translation was that if there was high fog cloud on Mushera mountain while Clara mountain remained clear this was a sign of good weather, however if Mushera (i.e. Musheramore) was clear and Clara had fog on top then that would be a sign of bad weather.