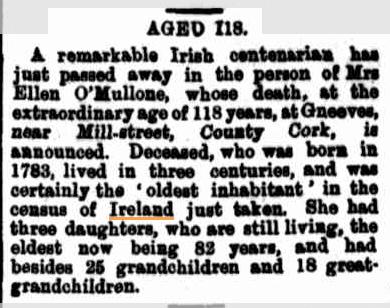 “Extraordinary Age. In a recent issue we chronicled the death of the oldest person in Ireland at Gneeves, four miles from Millstreet, County Cork. Mrs. Ellen O’Mullane. the deceased, was born in Ballyvourney in the year 1783. ‘ Her father, Timothy Cronin. belonged to a respectable family of farmers in the neighbourhood of Millstreet. The deceased, at the age of 35, married a farmer named O’Mullane, who died forty-three years ago. She had three daughters, who are living, the eldest being 82 years old, 25 grandchildren, and 18 great-grandchildren, some of whom are in Canada. She was a woman of robust frame and vigorous constitution. Her chief pride was to boast that she was never a day sick during her long life, although working hard. It need not be said from the time and place of her birth, that she had a fluent Gaelic tongue, which was the language always used in the house. Her mind was a treasury of legends, songs, and folk-lore, with which she used to entertain her neighbours, young and old, during the winter nights in that weird locality, over hanging the enchanted Lake of Coomeenatrush, where the river Finnow rises, near Clydagh(??). She was in full possession of her faculties up to the hour of her death, and was about the house up to two weeks previous to her demise. A large concourse of people followed her remains to her native Ballyvourney, where she rests near the Shrine of St. Gobnait. Many of her legends and stories have been committed to writing.

The death register had her only down as 114 years though!

Ellen just missed out on the 1901 census by a month :-(. In that census her daughter Kate Creedon is listed as being 70 years, living with her son Cornelius and daughter-in-law Johanna.

Cornelius and Johanna had married a few weeks previously in Ballyvourney:

Marriage of CORNELIUS CREEDON and JOHANNA DONOGHUE on 17 February 1901: Son of Patrick Creedon (deceased)  – a farmer from Gneeves, daughter, daughter of John O’Donoghue (deceased) from Coolnaclohy, Ballyvourney. Married by Michael Walsh PP, in the presence of Jeremiah Twomey and Julia Juice.

Kate Creedon died in on January 7th 1916 at Main Street, Millstreet – aged 72 – in the presence of her daughter Ellen Casey (married John Casey 1895)

This is an interesting post from a family descendent a while back:

Old Eileen and John Mullane had 3 daughters: Ellen, Nora, and Catherine (Kit). Kit, my gg-grandmother married Patrick Creedon in 1856. They had six children: Catherine b 1857, Cornelius b 1860, John b 1862, Ellen b 1865, Timothy b 1867 and Mary b 1870. This information came from Family Search International Genealogical Index.

Arithmetic cautions me there could be a problem with the years of Old Eileen’s birth. So far I have been unable to confirm her birth, death or burial. I’m assuming she is from Drishane Civil Parish. In the Tithe Appointment Book of 1832 Patrick, Jeremiah, and Darby Cronin listed in Caherbarnagh; a John Cronin in Coolanarney; a Daniel Cronin in Inches; a Jeremiah Cronin in Knocknaloman. Does anyone know these families? Did any of these families have an Eileen or Ellen?