Mary Immaculate College lecturer and Millstreet native Diarmuid O’Driscoll, who is Head of Mathematics and Computer Studies at Mary Immaculate College, were amongst those recognised at a special awards ceremony held in Dublin Castle earlier this week. Diarmuid received his award from Prof. Mary McAleese (former president of Ireland) 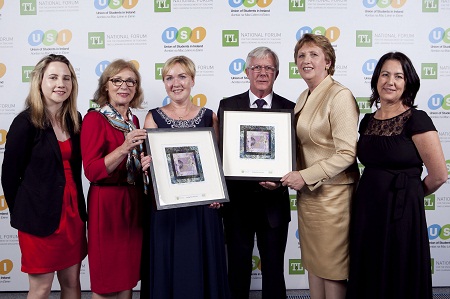 Offering his congratulations Prof. Michael A Hayes, President of MIC said: “I congratulate Dr. Mary Moloney and Diarmuid O’Driscoll on this very significant recognition of their talents as teachers. I wish to sincerely thank MIC Students’ Union for engaging with the National Forum and for the considerable work it has put into the award process. This is a wonderful example of the spirit of community, centrality of the student, and excellence in teaching and learning that underpins all of MIC’s activities”. [ref: mic.ul.ie]