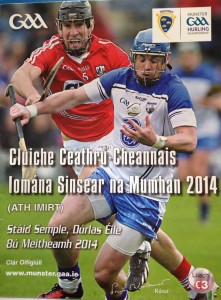 Mark Ellis had another good game for Cork against Waterford in the Munster Senior Hurling quarter final on Sunday last in Thurles, mopping up lots of loose ball, tackling well and delivering good ball to the forwards.

It was also great to see the Millstreet man on the front cover of the match programme (pictured right).

All Ireland champions Clare are up next Sunday in the semi-final, and undoubtedly Davy Fitzgerald will target Mark’s lack of experience … but we do hope Mark keeps up his good form and solidifies his place at centre back.

Below are some photos and excerpts from what the papers are saying:

“there’s certainly a better structure in defence. Mark Ellis has a presence at number six, which was lacking in recent seasons since Ronan Curran’s retirement” – Evening Echo (9th June)

“Cork’s defence was also more tightly focused and gave early notice that scores would be harder come by. Mark Ellis’s intervention on Austin Gleeson as early as the fifth minute was a reminder that the young Mount Sion player would find space a more precious commodity this time around”– Irish Times (9th June)

“You’d imagine they’ll look to isolate Damien Cahalane at the edge of the square, and they’ll certainly test Mark Ellis’ composure at the heart of the half-back line with a roaming number 11” – Evening Echo (10th June)

“[Mark] Ellis and [Alan] Cadogan were flying, to be fair, they probably kept us in it when we were going badly. Cadogan got some lovely scores in the first half, we were glad to see the scoreboard ticking over” – Patrick Horgan in the Irish Examiner (6th June)

“Another positive was Mark Ellis’s display at centre-back. Mark has made great progress this year. He’s a player who was very, very close to playing last year and in hindsight, we probably could have used him more. We probably didn’t have the guts to play him because we hadn’t seen a lot of him but this year, he played a lot of league matches and I thought he was very good the last day. Centre back for Cork is a position that carries a lot of stature and it’s a big test for him. He’s a tremendous athlete, he has a great mental attitude and I think he has all the attributes to be there going forward.” – Jimmy Barry Murphy in the Irish Examiner (June 6th)

“There are more questions than answers for Cork, yet the games versus Waterford will have at least offered some interesting insights on individual players such as Aidan Walsh, Alan Cadogan, Mark Ellis, Damien Cahalane and Bill Cooper all of whom merit their place for the Munster semi-final based on capable showing thus far” – Stephen Twomey on PunditArena.com (10th June)

“… while in defence Stephen McDonnell, Christopher Joyce and Mark Ellis have barely put a foot wrong in the two outings to date” – Cork Independent (12th June)