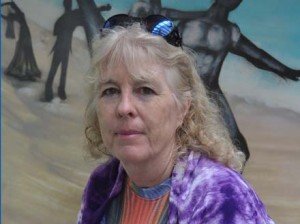 This June & July, the Vision Centre in Cork hosts a one-off special exhibition titled ‘MexiCork’ which brings together the works of seven internationally renowned artists from Mexico, Poland and Ireland. Curated by the Vision Centre Director John X Miller, MexiCork features a series of diverse works across the visual media spectrum.

One of the artists is Oweena Fogarty, an American photographer living in Mexico, and whose ancestors include a James O’Mahony, who emigrated with his family from Millstreet in 1926.

Read more about the MexiCork Exhibition on the Cork Vision Centre website.

Below is a biography of Oweena from 2008:
Oweena Camille Fogarty (Mexico, b. United States, 1952) was trained as a political scientist and interpreter at the Monterey Institute for International Studies. However while studying on a scholarship in Spain in 1975 she participated as a student in the FOTOCENTRO in Madrid, and came into contact with several important European and Latin American photographers such as Joan Fontcuberta, and Luis Poirot. Upon returning to the United States, she became involved in the West Coast photography movement and received a California Arts Council grant (1976-78) to photograph the farm workers organization –United Farm Workers led by Caesar Chavez. However the “decisive moment” occurred when Don Manuel Alvarez Bravo accepted her as an assistant in 1981 to print a series of platinum prints in his workshop. Later that year she became acquainted with photographers from the Consejo de la Fotografia Mexicana such as its founder Pedro Meyer and decided to teach a series of workshops and restore the extraordinary collection of nineteenth century portraits by photographer Romualdo Garcia in the Museo de la Alhondiga de Granaditas in Guanajuato. After accepting a teaching position in the Universidad Autonoma Metropolitana in Mexico City she began experimental work involving the human body in extreme situations. Enacting a series of performances that reflected an extensive study in anthropology, ethnography, philosophy and the metaphysical processes of live cycles in religious rituals she published the book Recinto Fugaces para Rituales del Tiempo al Viento. She earned a doctoral degree in sciences of the arts at the Universidad de Oriente in Santiago de Cuba (2002) for her theory of ancestral apparition and it’s “physio-psycho-alchemy,” a physical process that transforms the traditional healer into a “medium” or support system connected to eternal time and sacred geographies capable of opening the axis mundi and leading to the restoration of the ritual as an “act of rupture and liberation.” Today, she coordinates an investigative center on New Media at the Universidad Autonoma Metropolitana –Intermedia – which explores the cultural and artistic possibilities of the Internet.

in 2013 she created a project on Irish men that fought for Mexico in the 1840s war against the US.