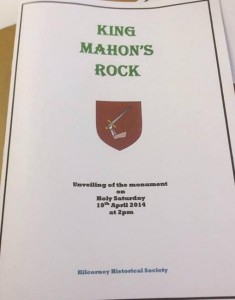 There will be an unveiling of a monument on Holy Saturday, 19th April 2014 at 2pm by the Kilcorney Historical Society.

King Mahon was the older brother of Brian Boru and King of Munster when he was assassinated in 976 on Mushera Mountain at a place traditionally marked by ‘Mahon’s Rock.’

Brian’s avenging of his brother’s killing was the opportunity for him to replace Mahon and go on to become the most famous High King of Ireland.

The event is to complement the millennium celebrations of the Battle of Clontarf.

Moira O’Brien, Director of the Clan O’Brien Foundation, will unveil the monument and deliver a talk on behalf of Lord Inchiquin, the direct descendant of Brian Boru and Head of the O’Brien Clan.