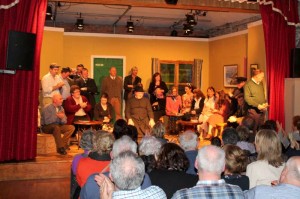 The Destiny of Fools

‘The Destiny of Fools’.Written by Mitchelstown man, Michael Dennehy, this play tells the story of publicans, Timmy and Kate O’Grady and the upheaval caused by the return of their wayward daughter , Nancy from England. Set in West Cork in the 1950’s, we meet the various locals in the sibin nestled at the foot of an imposing mountain, a mountain to which Kate has a strange and unhealthy attachment.

The cast of 20 features some of the group’s best known and established actors and also introduces some new talent to the stage.Come along for a great night