Liam was the son of Jack O’Driscoll a West Cork man who worked in Drishane, and his wife Kate Leahy of Rathcoole (up the hill from Ducey’s Railway gates). He also worked on the Drishane estate all his life and lived on the Kilcorney Road, out from Priest’s Cross. 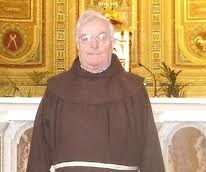 Liam’s aunt Margaret Leahy married Joseph Kennedy in 1929, a guard in Cork who’s father William Kennedy was in the RIC in Rathcoole. Their son became a Franciscan in Cork and took the name Fr. Sepharin Kennedy. It was he who officiated at Liam’s final mass.
Fr. Sepharin himself passed less than a year later on February 11th 2014, aged 82. He had been a missionary in South Africa before returning to Ireland in 1970’s.