A very welcome visitor to Millstreet this week is 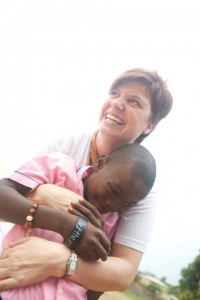 American author and blogger of Irish descent, Rebekah Ruth. She is visiting the “real” Irish town that inspired the setting for her first novel Where the Pink Houses Are. Released in 2011, the novel took place in the fictional “Millway” where the author’s ability to conjure up the scenes were based on good old-fashioned imagination, and a bit of Google.

In her first trip to Ireland, Ruth intends to use her visit to Millstreet to follow where the first story left off and launch, in earnest, her second novel.  She is thrilled to be staying in one of Millstreet’s gracious B&B’s; a home base for her visit this July.   “I will actually be able to infuse the real town into my book. I will have a feel for the “personality” of the place. It will still be fiction. But it will feel so much more real to me…and hopefully to my readers!” says Ruth.  A full description of her decision to make this first trip to Ireland is in her blog post from last May.

Ruth’s first book, Where the Pink Houses Are, has garnered positive reviews.  It received the coveted Kirkus Star, which is “awarded to books of remarkable merit” and was also named by Kirkus Reviews as one of the best Indie books of 2012.  Kirkus Reviews has been an authority in book discovery for over 80 years and they are known as “The World’s Toughest Book Critics.”

Her novel was published in November 2011 by WestBow Press. Kirkus Indie published the following review on May 30, 2012:

WHERE THE PINK HOUSES ARE

In this tightly written book filled with vivid Irish scenery and culture, characters are constructed so well that the reader might feel as if they’ve met before. Physical and spiritual encounters pull the reader into the story due to their surprisingly realistic nature, while characters grow and change seemingly because of God’s presence—or lack thereof—in their lives. Ruth skillfully and charmingly leads the reader through the winding paths of the human condition, tempered by divine guidance.

Where the Pink Houses Are is available for download on Kindle, Nook, and iTunes as well as in hardcover and softcover from online stores.

Rebekah Ruth lives in Buffalo, NY with her husband and four children.  On this first visit to her father’s homeland, Ruth says “I’ll just have to see where it leads me…and my characters.”

For more about the author, go to http://www.rebekahruthbooks.com/mediaevents/author-biopicture/