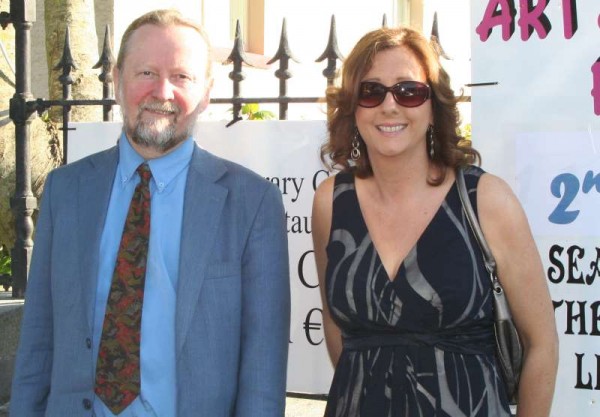 Our pictures show Karen with John Bowman who opened the 42nd Listowel Writers Week at the Listowel Arms. And Karen with Noel King, Editor of Doghouse Books, a Tralee publisher.

The following is the Press Release outlining Karen’s achievements and journey to this magnificent award.

Karen O’Connor a native of Millstreet, Co. Cork and now living in Tralee has won first prize in the 2013 Listowel Writers’ Week Single Poem Competition with her poem The Bone Shop.  The competition, adjudicated by well know poet John McAuliffe, was one of the prizes awarded at the Listowel Arms Hotel on Wednesday 29th May during the opening ceremony of the 42nd Listowel Writers’ Week Literary Festival.

Karen has already had two books of poetry published with Doghouse Books, a Tralee based publisher.  Her first collection, Fingerprints (On Canvas), was published in 2005 and her second collection, Between The Lines, was published in 2011 and was featured on the RTE Radio 1 Arts Programme, Arena.  Karen is no stranger to winning competitions and is a past winner of the Nora Fahy Literary Award.

To win Listowel Writers’ Week Single Poem Competition is a dream come true.  I couldn’t believe it when they rang and said I’d won.  I kept thinking it was a mistake and they would ring me back and say I hadn’t won at all!

I suppose I consider Listowel Writers’ Week and the West Cork Literary Festival (Bantry) to be my local festivals and I never miss an opportunity to go to both.  So for me, those are the ones that I would dearly love to win.  I have been lucky enough to be both Longlisted and Shortlisted for the Fish Poetry Prize (Part of the West Cork Literary Festival) for the past three years and I won the end of Festival Slam at the Festival back in 2006.  I was also Shortlisted for Listowel Writers’ Week Single Poem in 2010.  So I’ve been skating around the periphery of these competitions and I was beginning to think it would never happen for me and then out of the blue, there is a call and it’s just such an amazing feeling.

I’m thrilled also because of the poem in question.  I suppose every time you write something new, you think this is the one.  But with The Bone Shop, I wrote it, first and foremost, for myself.  It is an intensely personal poem.  My mother has been the inspiration behind many of my poems and when I think back to the first time I came to Listowel Writers’ Week she was the one I wanted to tell the revelation I’d had – that I wanted to be a writer.  And now to have won with a poem about her is incredible.