A light cover of snow lay on the mountain and the air had a wintery chill
And the cold damp winds of January blew across Clara hill
As we climbed up towards the wooden cross Jerry and John Mahony, Donal Hickey and I
A memory to remember until the day I die.

The Mahonys had their working dog Sandy with them and Donal had Jerry his cattle dog
And the climb up through the snow clad bracken for Schoolboys a hard old slog
The dogs bored without a fox or hare to chase suddenly commenced to fight
For Jerry a bloodless victory though not a pretty sight. END_OF_DOCUMENT_TOKEN_TO_BE_REPLACED 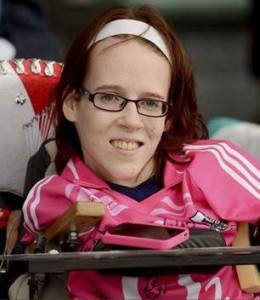 Joanne O’Riordan who was born without arms and legs has vowed to get a documentary on her life completed, despite the Irish Film Board’s shock decision to axe funding.

Joanne, 16, from Millstreet, Co Cork, was honoured by the United Nations last April for the incredible courage and determination she has shown in defying her disability.

Joanne told the Sunday Independent that while she is “shocked and very disappointed”, she will not let the controversial IFB decision scuttle her project.

The documentary — entitled No Limbs, No Limits — was axed after the IFB said it did not believe the project had END_OF_DOCUMENT_TOKEN_TO_BE_REPLACED