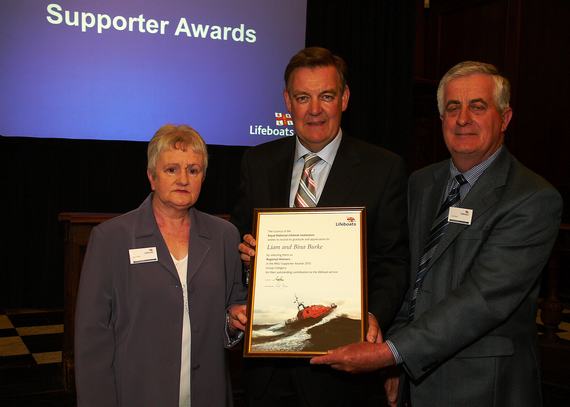 The annual RNLI Ireland awards took place over the weekend at the Royal Hospital Kilmainham in Dublin, with volunteers and supporters being recognised for their role in raising funds and awareness for the charity that saves lives at sea.  Guest of honour was RTE’s Bryan Dobson, who spoke of his admiration for the RNLI and handed out awards to forty-five volunteers. Bina and Liam Burke’s received a regional group supporter award for their work on behalf of Countmacsherry lifeboat.  The couple have formed a personal association with the station after they lost their son Aidan in a tragedy.  They never forgot the support they received from Courtmacsherry Lifeboat Station during this most difficult time. Bina and Liam live in Millstreet and over the last ten years they have organised and collected at the local church gates.  As well as raising much needed funds, they have raised the awareness of the RNLI in the community.    This has resulted in a number of other charity events taking place in the area in aid of the RNLI. Over the years, Bina and Liam have raised over €20,000 for the station but more importantly a long lasting bond of friendship has been formed between Bina and Liam and the Courtmacsherry volunteers.

1 thought on “Bina and Liam honoured by the RNLI”