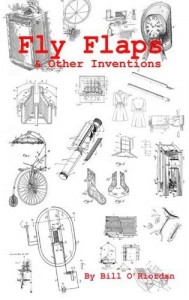 Fly Flaps & Other Inventions, (ISBN 978-1477488195) is a self published book by Bill O’Riordan that includes descriptions and explanations for some 200 ideas, concepts and patentable inventions he has had over the years, and he believes that some of them could be viable opportunities for anyone who reads the book. None of the ideas have any patent protection, and he’s publishing them now because he believes someone will be inspired by them and use them.

He is giving them away in the hope that someone, somewhere might be able to take them further than he can, and bring one or two of them to market. Ultimately it’s hoped that some of the ideas in the book could boost employment rates in Ireland or indeed anywhere in the world.

The book Fly Flaps & Other Inventions is loosely based on notes he’s made over the years as the ideas occurred to him.  The reason he’s publishing them now is simply to bring them out from his “shed” and set them free; “to see what happens.” He says.

Bill O’Riordan, originally from Millstreet in Co. Cork, Ireland says; “I’ve probably spent way too much time in my “man-shed” trying to develop these products or ideas, without ever completing a patentable prototype, or a design plan, as I tend to jump to the next idea too quickly, and its expensive to set up a patent.  Ideas tend to come to me at strange times, usually when I’m trying to do something else, like getting rid of the flies out of the house without killing them, for example. By writing them down it meant I would never lose them, and I’m always saying I could get back to this one or that one at some stage.”

Last year Bill had a relatively serious moment that left him in hospital for a few weeks where he was able to spend time contemplating what he was doing with his life up to that point. He has never brought any of his inventions to investors for example, as that side of things is something that he doesn’t have experience with. But that brush with mortality prompted him to start writing down all of the ideas he’s had, “in case he does cash in too early, and his kids may never know what he was thinking.”

“Originally it was my wife who suggested I should try to put these ideas together in a more user friendly way, hoping I suppose that by writing them down properly I’d be less likely to blow myself up.”

“The book is dedicated to her, as her patience is a testament to the woman herself for putting up with me, stomping around with some new idea, and nearly killing myself a few times.” He says.

The reason he hasn’t had success with any of the ideas is probably down to the fact, he admits, that he’s not really an entrepreneur, in the classical sense of the word, meaning that “I lack that singularity of purpose, that drive and concentration to follow through with an idea to the bitter end.”

But a lot of it also has to do with finances, or the lack of it.  “Risking our life savings in some mad cap idea has always been a non starter in our house.” He says, adding that “New businesses fail almost 100% of the time, and it is more than certain that if I tried to invest our savings in a new idea, the way I’d go about it would absolutely lead to failure, I don’t have that kind of business edge.” He admits.

Bill also adds that he doesn’t present well, and he would be more than likely ripped apart by the likes of Dragons Den. He did try to appear on the 2012 edition of the Irish Dragons Den, but the idea was not at a sufficiently developed stage to make it to the final show.

Despite the fact he is not an engineer, he has a degree in Philosophy & History, the inventions he describes in the book are almost all based on needs of some form or another. With “need being the mother of invention” he hopes that something in this book will click with someone out there, looking for an idea to develop.

There are no Intellectual Property claims on any of the concepts, apart from the copyright of the book itself, so anyone is welcome to take and adapt the ideas as they see fit. Some of the ideas, or variations of them may even have been invented before, in some form or other, but as Bill himself says; “Ideas are always free until someone spends a lot of money trying to claim them.”

Bill adds that Fly Flaps & Other Inventions (ISBN 978-1477488195)  is like a set of “elevator pitches” he would give if he owned his own Venture Capital fund, and if he ever does get his hands on such a fund he will certainly invent something. He may even have kept one or two of these ideas up his sleeve for later?

Fly Flaps & Other Inventions is printed and distributed by CreateSpace, as a self published title and is due out in 2012.

It will be available in printed form primarily from all of the Amazon websites or as an eBook from most eBook sellers, including Kindle, or on paperback / eBooks on lulu.com

If any book distributors might be interested to take the title Bill would love to hear from you.

Article is from Bill’s own blog: goodandglory.wordpress.com

Interested, then read a few pages from the book!

Bill has also published another book called An Imaginary Filmography