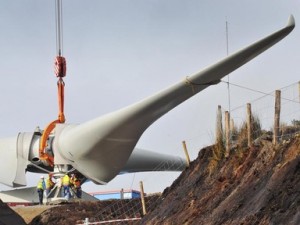 Energia is finishing the build of its latest wind farm, Caherdowney, located just south of the Quarry on the Macroom road The €14m wind farm at Caherdowney in Co Cork will have the capacity to produce 9.2MW of renewable power from its four wind turbines, according to the independent energy supplier.

The turbines being used in the build are Enercon E70 models with a hub height of 64.5 metres and a rotor blade diameter of 70 metres. The company said the Caherdowney site was chosen because of its high average wind speeds. It said once the wind farm is fully operational it will be capable of powering up to 9,200 homes.

video: Installation of one of the turbines (2013)