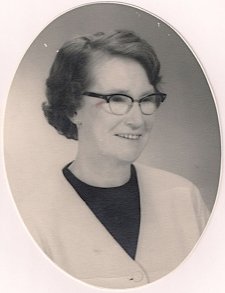 It was with no small touch of nostalgia that I read recently of the closing of Barrett’s at The Square. This was the location that my mother, Catherine Duggan, then Catherine Murphy, came to as a young woman. She started out in Macroom and trained as a milliner. She designed and made hats and she was exceptionally good at this craft. She was a reserved, dignified woman and still quite young, perhaps in her early twenties, when she arrived in Millstreet to continue her apprenticeship at Barrett’s. I have also heard over the years that she was quite lovely to look at. My father, Cornelius Duggan of The Bridge, spotted her and began what might best be described as a year-long pursuit of her in the hopes of getting a Sunday afternoon date. He was an only child and was used to getting his way and so he persisted. My mother once told me that she took her best friend, whose name eludes me, on each Sunday afternoon “outing” in Con Duggan’s car. Yes, she was that shy.
There were other suitors as well, but Con Duggan won the day and won the Lady. Eventually, they got married and settled at The Bridge. My mother ran what was then called the Drapery Shop. They started a family which ended up being eleven in all. Early on, a son, Augustine (Gussy), died at the age of six or seven of spinal meningitis. She once told me that she was so broken-hearted she sat up in bed every night for a year, crying for the loss of that little boy. She then suffered the guilt of believing that she was not accepting God’s will in her loss. We now have a better understanding of the fact that God does not will these sad occurrences.

In the Drapery Shop she was an efficient and personable businesswoman. She continued to design and make hats. Many a Saturday night I would watch her “whip up” a hat for Sunday morning Mass. She would be in that shop in the mornings, late at night, Sundays through Saturdays, as people were always showing up at odd hours in need of a pair of stockings, a sweater, a tie or a set of dishes. The sweaters of all kinds were fashioned by Maura, upstairs in a back room. This was called “The Knitting Room.” The brand was Tubrid and they were sold far and wide to country folks as well as those in the town.
Of course during all this time Mammy was also rearing all of us. My father, Con Duggan, died in 1947 while still in his forties and my mother became the sole parent and business operator. As the family grew up, everyone, at one time or another, pitched in to help. In PICTURE MILLSTREET there are photographs showing Noel, Denis, Pat, Tim and even me, somewhere around the front of the business doing some chore or other. I remember Fidelis covered in flour from head to toe when he operated the crushing mill, grinding grain into flour for the farmers! When my mother sent Noel C. to be trained in the running of a business, he came back and went full swing into making it a place where everything that was needed by a farmer, a housewife or a builder could be found.

In those times, shops didn’t stock toys year round as they do now. My favorite time was when the toy salesman (we called them travelers then) came by with his treasure trove of samples. Toys were ordered well in advance of the holidays so that a supply would be there when parents came to stuff the stockings. Mammy would let me watch and occasionally I would give my approval of some specific item ordered…most likely a doll as I was the resident expert on that score. At one point I had seven. I believe the salesman represented Day’s in Cork where they had toys year-round. I also do remember that he had only one arm.
When Mammy died and her funeral procession was on its way to Drishane, the hearse stopped outside Duggan’s Stores at The Bridge for three minutes. A lifetime of memories, sad and happy, mostly sad, rushed through me in those moments. 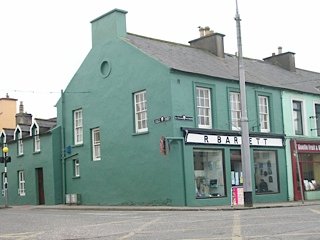 My mother was respected and cherished as a woman of character, decency and honesty. Her funeral in 1 982 was attended by a large number of people who came to pay their respects to her and to honor her long history in Millstreet, from Barrett’s to The Bridge to Woodmist to Drishane and, without any doubt, to Heaven. This is just a sketch of a good and exceptionally decent woman. Since I am the youngest of the eleven, those who knew her longer than I did can fill in what is missing. More sketches to come.
She is the reason why the closing of Barrett’s caused me some nostalgia. God Bless my mother and her memory. God bless the Barrett family. God bless us all.