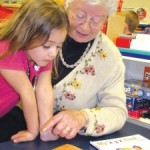 Dia is mhuire diobh go leir a cairde and welcome to News Report 1111  from Millstreet.

Fondest greetings dear listeners and I wish you all the very best on this rather wet  but mild Tuesday morning.

The AGM of the Lotto Committee was held at the Wallis Arms Hotel on Friday night. It was very well attended, and all three participating bodies were represented, they are the Town Park, the GAA and the Community Council. Joint Chairmen Denis Twomey and Councillor Noel Buckley presided. Secretary Marie Twomey, read the minutes of the previous AGM and the treasurer’s report made very pleasant reading .The lotto which was set up in 1994, is one of  our most successful ventures ever, continuing to raise valuable funds to keep our key projects going. Copies of the Treasurer’s report are available on request.

Noel Buckley thanked the public for their continued support and thanked Billy and Ellen at the Wallis Arms for the  free use of their room on Sunday nights for the checking of tickets. Votes of sympathy were extended to Johnny O’Keeffe on the  death of Lena and to the Kiely family on the recent passing of Brendan, both long serving members of the lotto in their time, RIP.

At the election of officers the committee was re- elected in bloc, and the AGM  was followed by a very pleasant social evening.

The Clean-up of our town and approach roads was a great success in the run-up to the latest Walking Festival. People came out as requested and put their shoulders to the wheel. Some going out three and four miles on the approach roads. And the fruits of their labour is easy to see. But now that our place is clean and tidy please keep it that way. Don’t throw rubbish away and if you see some then please pick it up.

Our Walking Fest  committee can proudly take a bow following another highly successful two-day event which brought over 300 people into our area on Saturday and Sunday. Look up the Website for all the pictures and for the messages of thanks from  happy walkers.

On Sunday evening the Mountain Runners Association held their annual run to the top of Clara, and by the way the new cross has been erected in the past few days to replace the one that was put there in 1982.

April 28th will see the return of the mighty Millstreet Adventure Challenge which was such a  great success last year. All the details are on the Web.

The organisers of the recent Vintage Rally want to say many thanks to all those who helped in any way to make it the great success that it was.

The Divine Mercy Devotions were held in our Church on Sunday at 3pm. This is a popular Holy Ceremony every year and is always well attended.

The notes for the next issue of Clara News are due in to the Editor this Thursday, April 19th. Please take note of the early date.

Don’t forget to tune in to LTV2 this Thursday night at ten for program 211, the second last one of the present series. Religious program and the repeats of local TV on Sunday starting at 5pm.

IRD Duhallow invites you to a Titanic Remembrence night this Thursday starting at the James o Keeffe Institute at 7.30. Admission is free.

Jewellery Demonstration by the Dromtarrife ICA to-night at 8.30.

Bingo in Millstreet on Thursday night every week.

Our Radio Station C 103 are asking for old stamps in aid of the Guide Dogs, please leave them in at the Post Office.

Coffee morning in aid of Marymount Hospice at our Pastoral Centre this Saturday April 21st from 10  to 2.

Feile Ceoil Millstreet will be held at our Community School on Sunday next April 22nd with some competitions starting as early as 12.30.

Every Good wish to the Millstreet Scor Sinsear team who are competing in the “Novelty Act” section  of  the  All Ireland Final at INEC Killarney on Saturday next April 21st. Doors open at 2pm, Show starts at 3. Tickets will be available at the door.

Many congratulations to our  U21 A football team on becoming Duhallow Champions, beating the Blackwater Gaels in Boherbue on Sunday.

To-morrow Wednesday its Newmarket V Millstreet in the Junior A Hurling League, in Millstreet at 7pm.

Here are the results of this week’s parish lotto draws held at the Mal Passo Bar on Sunday night. Numbers drawn were 2, 6, 21, 29 and the Jackpot was not won. €100 went Bernadette Cotter, 19 Murphy’s Tce. The seller was Denis Hickey and he got €50 sellers prize, €50 went to Eimer Dennehy, Geararoe, €20 each to Susie (the cat) Collins, Clara rd.