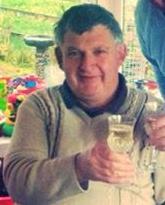 It is an honour to know such a man who has brought honour to Millstreet Town
As an expert on coursing and coursing dogs he has earned his own renown
As a young man a manhole builder now he knows of a greater fame
In Irish coursing circles his is a renowned name.

by Francis Duggan, after Dan O’Donoghue won the National Fantasy Coursing Competition for the third time