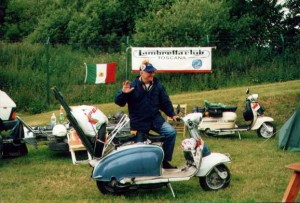 Back 1998 the Euro Lamberetta Jamboree was held in the Green Glens, Millstreet from the 19th to the 21st of June, when hundreds of Lambretta owners from all over Europe descended on Millstreet for three days.

Cesare Battaglini was an Italian who was the most famous of all long distance Lambretta riders, riding all over the world on his bikes, and he was in Millstreet for the festival. His recent death reminded us of this event: “Most times he continued riding to each event, either on a model D or a series 2. His first Irish Euro to Millstreet, for instance, involved a 2,700 mile round trip.” – from Jetset Magazine

Here are a few photos from the Jamboree: