Derrinagree Rally Competitor, Daniel Lucey and his Co-Driver, Conor O`Flynn from Millstreet in their 2 Litre Ford Escort are busy getting ready  to compete in the Donegal International Rally which is being held from END_OF_DOCUMENT_TOKEN_TO_BE_REPLACED

END_OF_DOCUMENT_TOKEN_TO_BE_REPLACED

… The most important and prominent of the Ninth’s Fenians was Timothy Deasy (also spelled Dacey), whose story MacNamara included in his regimental history. Deasy attained the rank of first lieutenant in the Ninth and received a wound at the Wilderness, As a Fenian overseas, he led an uprising at Millstreet, Co Cork, and was later assigned to oversee activities in Liverpool. At three o’clock in the morning on September 1867, Col Thomas J. Kelly and Deasy were arrested by the by the English while loitering on the street after a meeting of Fenian officers END_OF_DOCUMENT_TOKEN_TO_BE_REPLACED 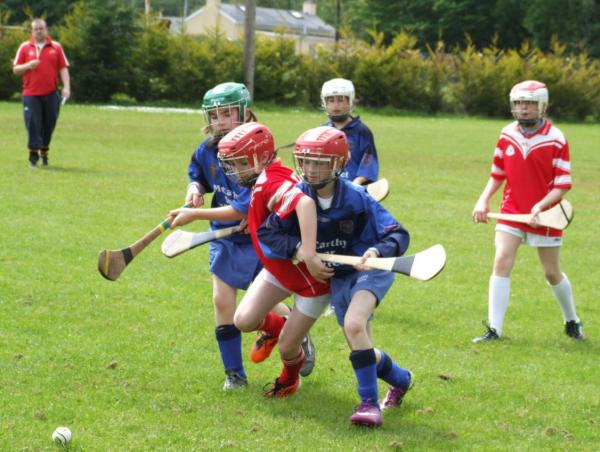 Photo shows girls from Banteer NS and  Presentation NS Millstreet Camogie team (in blue) challenging for the sliotar in grading matches in Rathcoole on Thursday.

Both Millstreet teams qualified for the finals where, Millstreet Boys NS will be playing Kanturk in the Boys’ 10 Aside Hurling Final, while Presentation NS Millstreet will play Derinagree NS in the Girls’ 7 Aside Camogie Final which will be held on the 10th of June.