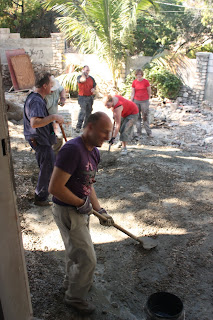 Greetings from Port-au-Prince, Haiti. I have been here since the 29th December leading a team of fifteen people. We have been working together with Haitian sisters and brothers in construction work (pictured on the right) as well as assisting in clinics and helping at an orphanage. It has also been a privilege to share in the life of the Methodist Church here in Haiti. Wednesday was the first anniversary of the terrible earthquake which struck Haiti on 12th January last year. We were delighted to join with a crowd of many thousands of people who gathered in one of the main streets of the city centre from 6 o’clock in the morning. Just beside the ruins of the Presidential Palace people stood in the hot sun worshipping God for over five hours. We had thought that it might be a rather sombre and mournful occasion but those who were there were determined to praise the Lord and thank God for life. The theme of the service was “Celebrate Life”. I was privileged to be invited to address the crowd as I speak Creole, the local language having lived here twenty years ago. I was glad that I did not have to speak until several hours into the service because by END_OF_DOCUMENT_TOKEN_TO_BE_REPLACED