Brian Dennehy’s appearance on the Late Late on Friday evening is available on RTE’s website until January 28th. He refers to Millstreet where his grandfather came from twice in the interview and also to Noel C Duggan.

Since the video will only be available for the next few weeks, here’s a transcript of the dialogue referring to Millstreet, which contains an interesting story and some more trivia that is worth recording for the longer term:

(4:40 mins into the programme)
Tubridy: And you had plenty of connections with the place down there.
Dennehy: Well as it turns out, Noel C Duggan who is a wonderful guy from Millstreet which is where my grandfather was from, did a whole bunch of research and called us one day to let us know that my great-grandmother (my grandfathers mother) was from Kilmackowen which is about 2 miles from Ardgroom, and somehow we had found this place which was about 2 miles or so where she lived in the 1850s.

Tubridy: Was it your grandfather who left Ireland, Brian
Dennehy: Yeah, my grandfather was Denis Dennehy from Millstreet
Tubridy: did he train for the priesthood, was it..
Dennehy: no that was my father. My grandgather was a bit like the Bull McCabe. He was not necessarily interested in the intellectual life. He worked in a factory in Bridgeport for his whole life, and he came at a very young age, he and all of his brothers and sisters came, and never went back! so he would write to his mother and talk to her on the telephone, but he would not go back cos he was very bitter about being forced to leave. But he was happy in Bridegeport but he could not understand why my father wanted to be educated, so my father did a really interesting thing Ed Dennehy: he told everyone that he wanted to become a priest, and in those days which would have been  the late 20s, when you said that, you were plucked out of school and sent to college and seminary which he did do and he was so smart he wound up at the American University of Louvain in Belgium studing with Cardinal Mercier, until the time came when he had to go and lay down on the altar and he said “I’ve changed my mind … I don’t have a vocation at all”, and within two years I was on the scene. But he was an amazing guy and a real genuine intellectual, and my grandfather was the exact opposite, but he was one of those people when you’re an American Irishmen, you look back at those that took that great leap out in the 19th century as he did when he was very young … can you imagine leaving your home, your mother and father at age 15 or 16 and just throwing the dice. Extraordinary people, we got some good ones and fortunately he was one of them …

Another article from the same time:

“Dennehy says he could not be more excited to return to Ireland, a place he called home for about ten years. His Irish roots extend to the West and Southwest of Ireland on both sides of his family – on his father’s side, his grandfather was born in Millstreet, County Cork, and his grandmother was born in Kilmacalogue in West Cork. He knows that they “were born back in the 1850s or 1860s, and were essentially farm workers, and my grandfather emigrated I’m guessing sometime around 1900 – 1904, 1905, he was very young. All of his brothers and sisters eventually came to America and they were all factory workers – they worked for a major factory in Bridgeport, Connecticut called Jenkin’s Valve, which is no longer there.
On Dennehy’s mother’s side were the Mannions. His grandmother emigrated from Waterford and became a domestic in the United States, a few generations earlier than his father’s people. Most of his relatives settled in Bridgeport and Danbury.”

We get a lot of queries about the Dennehy’s of Church Street, so writing them down here so I don’t have to look them up again. (mdc. Nov 2018)

Marriage of EDWARDUS (EDWARD) DENEHY of MILLSTREET and JUDE (Julia?) CARROL of MILLSTREET on 15 May 1866. Son of Denis Denehy. Daughter of Denial Carroll.

Marriage of EDMOND DENEHY of Millstreet and HANORA LEARY of Keale on 2nd April 1880 at Derrinagree Church. Son of Denis Dennehy a labourer, a widower aged 50, a tradesman(?). Daughter of Patrick Leary a labourer, aged 19. [parish record]

1901 census: Residents of a house 28 in Church Street (Drishane, Cork)

[*1] Baptism of BRIGITTE (BRIDGET) DENNEHY of MILLSTREET on 29 December 1893 in the Union Workhouse [birth].Mother Bridget is likely the daughter of Edmund’s first wife, born 1876.

Where the children went to:

Daniel (1872): Married Ellen Crowley of Mill Lane and lived with her family there, having 9+ children [more]

Jeremiah (1893): fought with the British in WWI (did he go to america later?)

Edmund fought  enlisted in Detroit in 1918 and saw action in St. Meihel-Argonnes. In the 1920 census of the US, there is an Edward Dennehy staying with Denis in Bridgeport. Brother?

The family were initially at Upper Green’s Lane, which is just off the Main Street in Millstreet, under the archway below Reen’s Pharmacy. [GMaps] 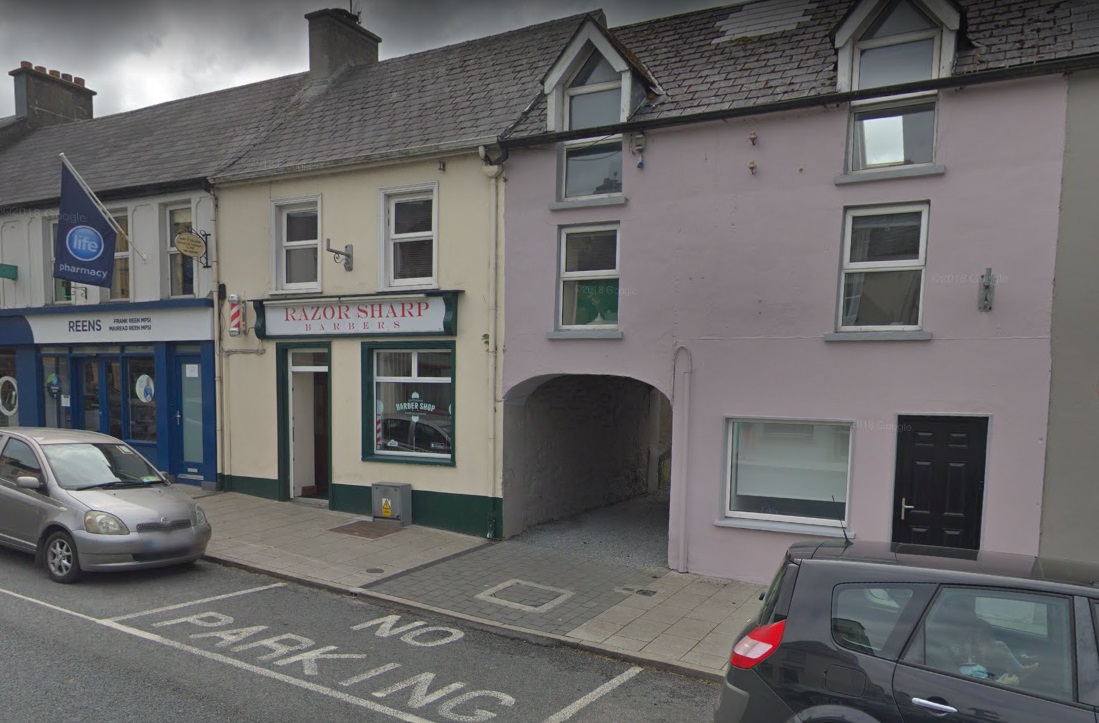 The Dennehy’s house was at #11 Church Street, across from the Munster Fire & Safety shop: 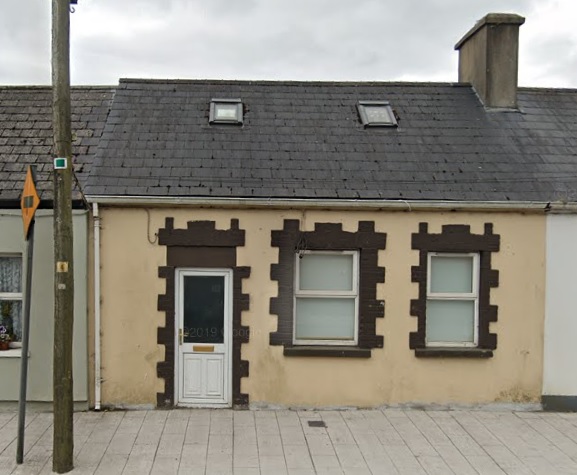 24 thoughts on “Brian Dennehy on the Late Late”