“… There was a time in the first half when I thought Cork were going to annihilate us; beat us by a cricket score. They were all over us; three men to the ball and Dinny Long rampant. He did more than anyone to break Galway’s back. Unchallenged, he raced through on solo-runs, often leaving yards between him and his bewildered and less fit opponents. Then when Galway started to rally Frank Cogan literally put Morgan Hughes in his pocket while Con Hartnett and Brian Murphy cleared ball after ball with ease and skill, John Coleman effectively barred Liam Sammon’s path to goal and after an early flourish Tom Naughton’s threat began to wane …” Read below for the full article

The inquests are still being held. The calm has followed the storm. Losing an All Ireland final is a terrible anti climax. Still it was heart warming to witness the great reception for the losing team in Eyre Square last Monday. As Liam Sammon said, it is easy to welcome home the victors but so much more genuine to give a pat on the back to the losers. I was proud of Galway last Sunday and prouder still of them in Eyre Square on Monday. For there were a happy bunch of lads, disappointed yes, but not dejected, defeated yet hopeful, glad to have gone so far and done so well. They have to start all over again, learn from past mistakes, seeking the elusive Sam Maguire Cup. But the thoughts are now on next year. No looking back. We have failed this year but we will have another go next year. We met a better team, a great team and a sporting one in Cork. They waited a long time for this one and we don’t begrudge them their glory. Comhghairdeachas a chroí, Corcaigh. There was a time in the first half when I thought Cork were going to annihilate us; beat us by a cricket score. They were all over us; three men to the ball and Dinny Long rampant. He did more than anyone to break Galway’s back. Unchallenged, he raced through on solo-runs, often leaving yards between him and his bewildered and less fit opponents. Then when Galway started to rally Frank Cogan literally put Morgan Hughes in his pocket while Con Hartnett and Brian Murphy cleared ball after ball with ease and skill, John Coleman effectively barred Liam Sammon’s path to goal and after an early flourish Tom Naughton’s threat began to wane. But more significantly, we were not prepared to be playing second fiddle for so long at midfield. Midway through the first half we were beaten to a frazzle at midfield. Liam O’Neill really starred in this period. Cork looked home and dried. It was no longer a game. Then came Tommy Joe Gilmore’s superb point after a spectacular run which left opponents floundering in his wake. What a rallying power. Galway were back in the game. But just before half time Cork got a lucky decision (so Tommy Joe Gilmore informs me) and a very valuable point off a free. Almost as valuable a score as their early goal. Almost. That goal was crippling from the start and gave Cork the confidence they needed. We all remember the second half and Galway’s great fight back. No team in Ireland would have fought so well against such a wonderful Cork team.” After Tom Naughton’s goal Galway had a distinct chance. But this was as near as Galway came to success. Jimmy Duggan’s miss, if goaled, might have opened up the game again but that was it. Defeat was never acknowledged as Galway tried might and main to the end. Cork had won a cherished title and Billy Morgan, that superb goalkeeper, with Galway blood in his veins, didn’t forget the late and great ‘Weeshie’ Murphy in his acceptance speech. If only Galway had got closer to Cork. There was too much leeway to make up. Jack Cosgrove, whom Galway followers doubted would not hold Ray Cummins, improved as the game progressed and was flying at the end. He has all his confidence restored again. It is so easy to be critical; very easy indeed. Ungracious though to be scoring off this team, which put up such a fine show in a game very worthy of the occasion. The catching was simply superb. Cork gave us a lesson in tactics and really used all their cards in their efforts to Joyce, Sammon and Duggan (one frontal attack on the latter was clearly intended to slow him down).

But we must build from here. We need at least two big forwards. Drastic needs re quire drastic measures and I suggest by experiment that we draft either Tommy Joe Gilmore or John Dillon or both into the attack immedi ately. We have backs galore and in Joe Waldron we had our star of the day. Here is the most improved footballer in Galway. Another polished performer was Johnny Hughes while substitutes Frank Canavan and Coleen McDonagh were huge improvements on the men they replaced — wee Coleen es pecially being very effective, winning every duel he con tested. Morgan Hughes was superb in the second half when changed to half forward –a future star. Galway’s first N.F.L. game is with (would you believe) Cork in Cork on Sunday, 20th October, when Galway hurlers also play Cork at the same venue. A special train for teams and supporters is being mooted. Why not an ‘All-in’ for this occasion too ? Last Sunday’s ‘All-in’ train was a great success (apart from the mad rush to get back to the train on time). I felt sorry for Liam Sammon to be the loosing captain for the second time. He has put an awful lot into the shaping of this team. Our team is not as potentially great as we were in 1963. Then all we needed was maturity. We still need that but we need a few replace ments to become a team like Cork — firing on all pistons from start to finish. It is early days yet to talk of 1974. The first round of the Connacht S.F.C. is a long Winter and more away and we have many more chances to assess our worth. So let’s wait and salute our team on a gallant effort. The score Cork 3-17, Galway 2-13 (attendance 73,308). Half time score was Cork 1-10, Galway 0-6.

Jimmy Barrett’s goal at the end: 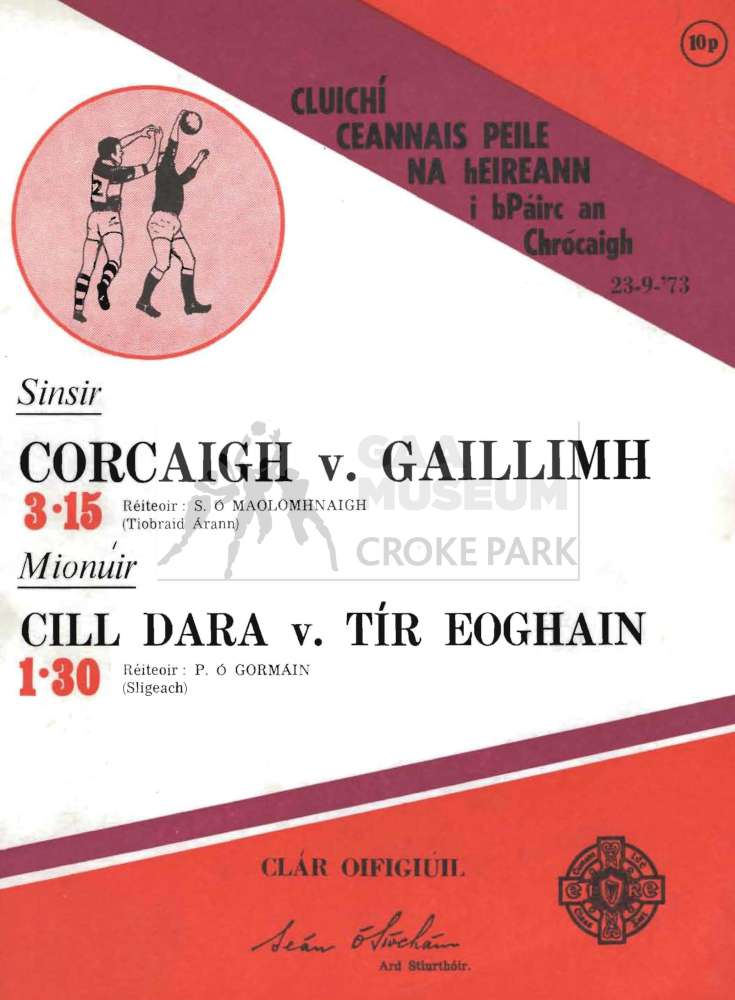 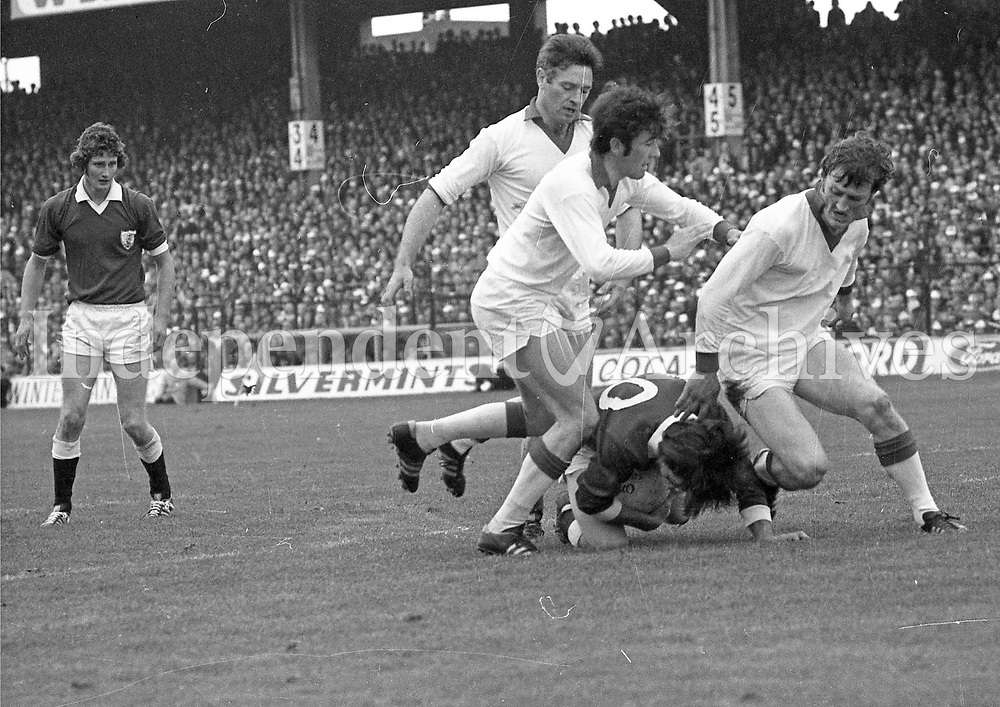 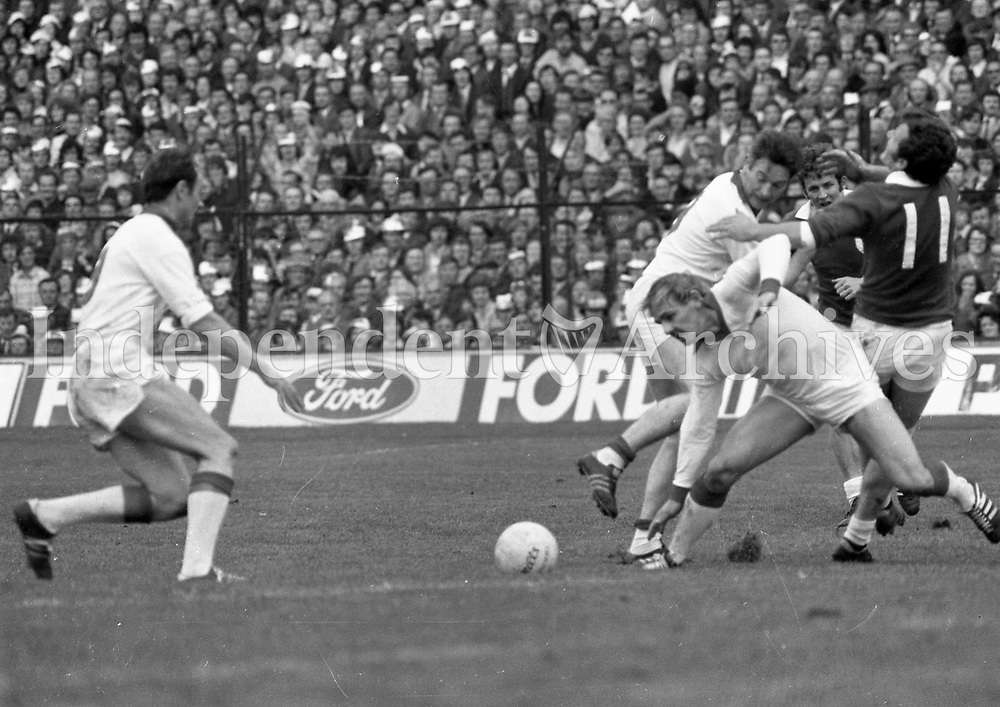 Humphrey made sure you never passed inside ! 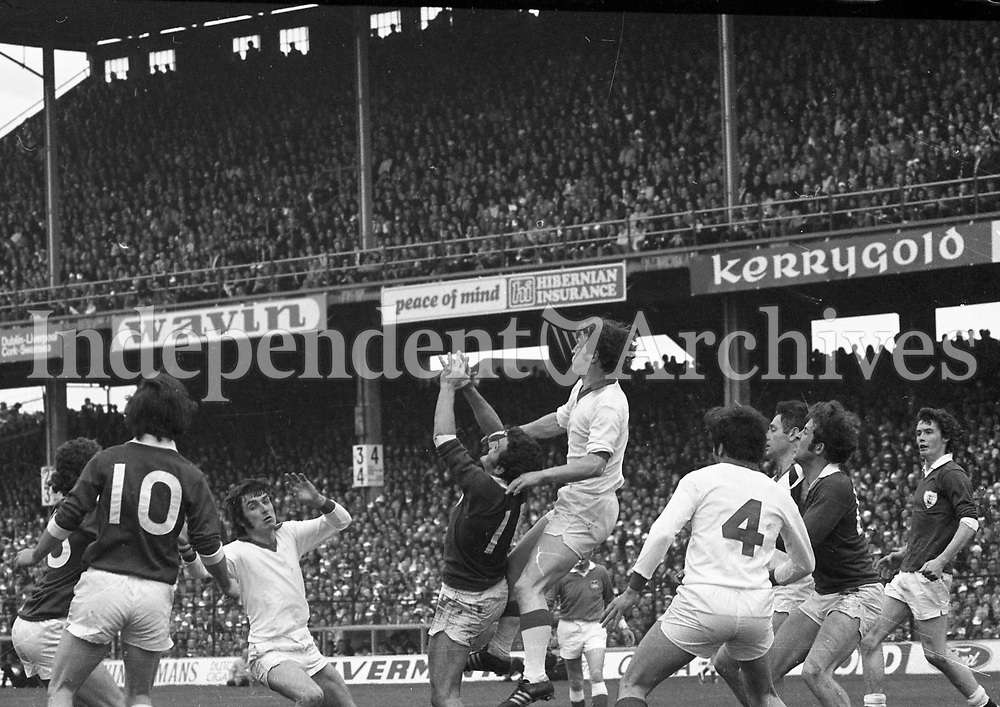 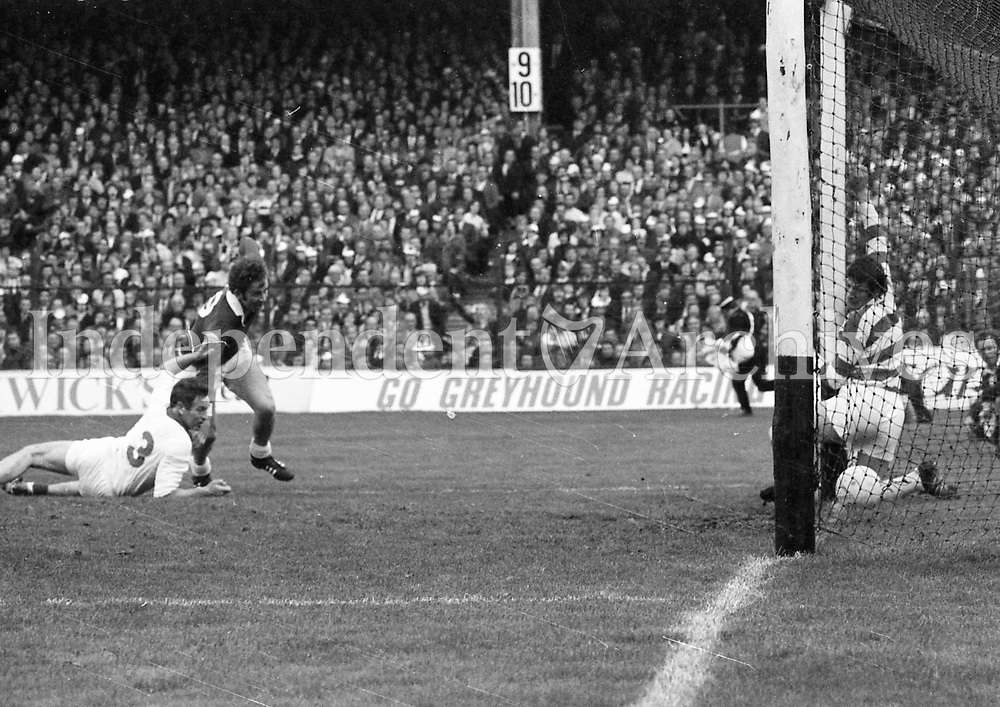 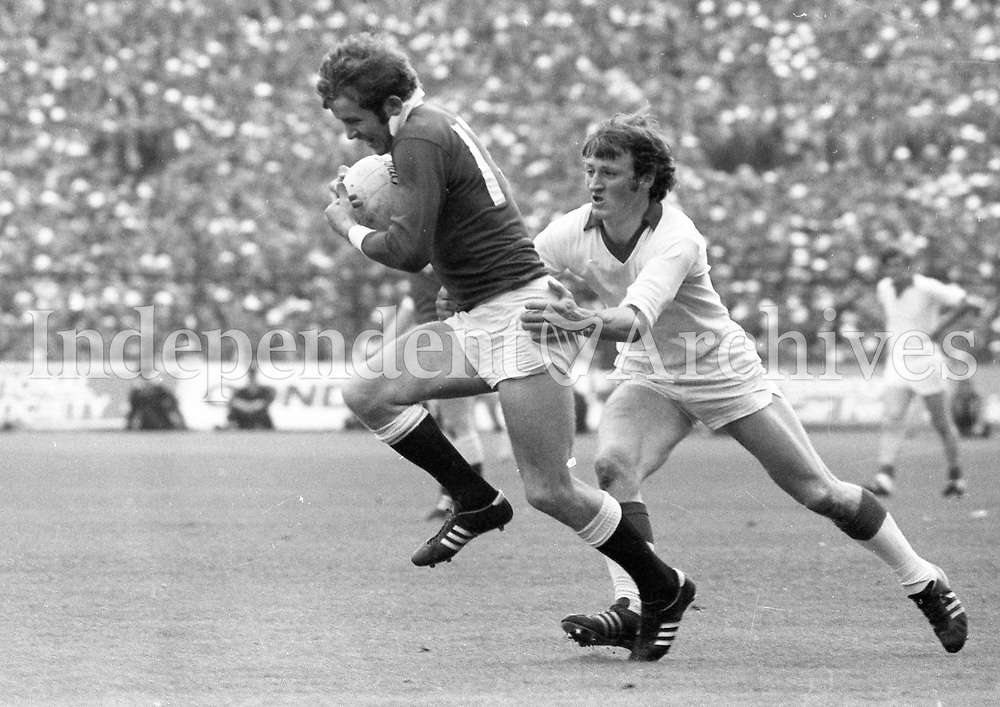 John Coleman hunting down his man

“Capable of filling any position with distinction, he (Declan Barron) was switched to centre back in the latter stages of the 1973 All-Ireland final after Millstreet’s John Coleman was forced off with an injury.” (Southern Star)