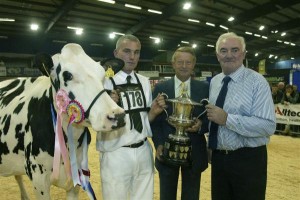 It was Double joy for the Barrett family at a very well attended 28th National Dairy Show, which was held last Saturday in the Green Glens Arena, Millstreet, Co. Cork. They not only had their Laurelmore Ruben Sassy cow defend her supreme champion title she previously won last year, but also added the Overall Jersey honours with Laurelelm Glamour. Making history as this was the first time that this multi-breed double has been achieved at the National Dairy Show.

The well known American Judge on the day, Charlie Will, was not faced with a easy task with some very large classes before him, especially early on when the junior classes filled the ring.

The 9.30 start did not deter the young handlers in the first classes as the enthusiasm shone through in the under-14 handler class. The class honours went to the youngest competitor in the class, nine year old Doneraile handler, Kevin Smith. Kevin had to give way to the more senior handlers in the Handler Championship, with the champion honours going to Caitriona Neville, Limerick … Read the full article on the National Dairy Show Website