There was a wonderfully enthusiastic gathering of people present for Thursday’s official launching of “Silent Voices” (a collection of poems written by asylum seekers living in Drishane) and “Speaking Faces” (Paintings by Kordula Packard – based in Sherkin Island).   It took place at the premises of O’Driscoll Travel in the Square, Millstreet.   Among the speakers were Kathy O’Connor, Senator Dan Boyle, Gene Barry, Dan Reilly (Chairperson, Sherkin Island Development Committee) while the many gifted poets read their own poems.   The Exhibition continues this Friday, Saturday and Sunday where paintings may be viewed and bought and the book of poetry may also be purchased.     Among the gathering also were Fr. John Fitzgerald,  Deputy Michael Creed, T.D.,  Stephen Kelly of H.S.E. and the Staff of Drishane Castle Accommodation Centre.   Sincere congratulations to All on a superbly organised event. 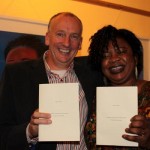 Fermoy poet Gene Barry (right) was the editor of the Silent Voices anthology, a collection of poems written by asylum seekers living in Millstreet, which was published by Rebel Poetry.
“In 2011 he worked for a three month period with asylum seekers at Drishane Castle in Millstreet and the end result was a chapbook of the attendees work called Silent Voices published by Rebel Poetry and launched by Dan Boyle of the Green Party. Once again Gene edited and produced the book free of charge.” He is the founder of the Fermoy Poetry Club – See more in this article.”

The late Tadhg O’Driscoll would indeed have been impressed to have had such an important cultural event taking place in his premises … Special thanks to Pádraig O’Driscoll for making the splendid central venue available without charge for the uplifting event.     (Seán R.)