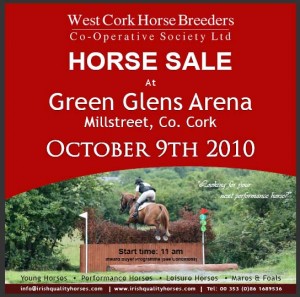 from the Irish Examiner

THERE was a 30% clearance rate at last Saturday’s horse sale at the Green Glens Arena in Millstreet, but organisers, the West Cork Horse Breeders (WCHB), said the only “disappointment” was at the prices fetched. It was noted, though, in a press release issued by WCHB chairman Kieran O’Gorman breeders took a pragmatic view, driven by the fact they were “overstocked heading into a long winter”.

The WCHB were pleased with the entry of 110 horses and said the general feeling was that the sale was a wise move and that the Green Glens had “huge potential for the horse fraternity in the south of Ireland”.