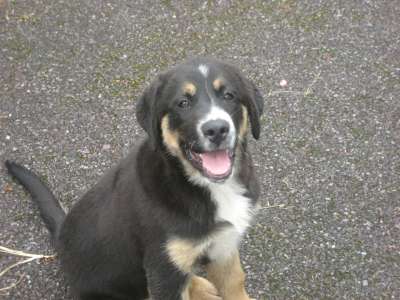 A stray dog was found in Tullig, yesterday
Very friendly.

3rd September 2010: We got off to the perfect start with a goal in the 3rd minute. A free kick from Tadhg Collins was saved by the keeper but Michael Murphy was following it in and finished to give us the lead. We had a couple of half chances in the next 20 mins but Macroom were dangerous when they went forward as well. In the 25th minute Mark Ellis received the ball on the wing and played a clever pass inside for M Murphy who rifled a volley to the top corner from the edge of the box to make it 2-0. We got a bit sloppy for the last 10 of the half but went in to the break 2-0 up. We picked up our game at the start of the 2nd half and went 3-0 up after 55 mins. From a corner on the left, Finbarr Corcoran saw his header saved but the rebound fell to Paul Dawson who slotted home. We sat back to quickly after this goal and were punished 5 mins later when they scored from a corner. 10 mins later they scored again to set up a nervy last 20 mins but we held on for an important 3 points. Best on the day for us were Eamon O Keeffe, Finbarr Corcoran and Michael Murphy.