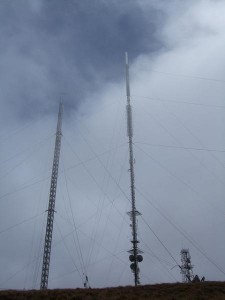 Work is ongoing on the the new digital TV transmitting mast on Mullaghanish which is beside the old analogue transmitter.  Signal testing has been taking place over the last while, and last week they turned on the beacon lights for aircraft etc … but they are so much stronger than the old lights, as to actually hurt the eyes if you look at them, and Millstreet is six miles away! The masts are easily visible from parts of Millstreet, and several locals have complained about how bright and intrusive they are (you can even see the lights during the day).

Lots of people were ringing into C103 radio station last Friday complaining about them, and there was a also this letter in the Examiner:

Mast light blots out the sky and pierces the eyes

AND so they have finally wiped out the sky. Stargazers lament. The strobe-like light atop the new TV mast at Mullaghanish in Co Cork must be the worst case of light pollution I have ever witnessed.

I cannot believe they are allowed to do this. Similar in its effect to strobe lighting at a disco, it is the most irritating and distressing light I have ever encountered. Visible all over mid-Cork, it flashes in through living room and bedroom alike, with great annoyance. As a hillwalker, stargazer and bat enthusiast, I find it most distressing to work in its presence. Is such a horrendous light atop the chimneys of Moneypoint at the mouth of the Shannon, the Spike in Dublin or even the Eiffel Tower?

I appeal to those responsible to find a more environmentally friendly solution and give back to people the right to observe the night sky – or at the very least to sleep in their bedrooms if they are unfortunate enough to have a window exposed to the flashing of this mega light. RTÉ, please reconsider.

Have a look and make up your own mind.

Update 25th Aug: All back to relative normality. Apparently, they left the daytime lights on during the night, and they are 10 times brighter than they should have been.

As for RTE Digital TV: RTÉ said that would have a national Digital TV free-to-air, which would be capable of being received by approximately 94.5% of the population ready by October this year. Analogue TV is due to be switched off on 31 December, 2012.

1 thought on “New lights on Mullaghanish”