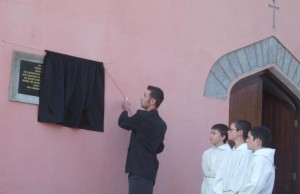 Last Sunday in blistering sunshine, Kilcorney unveiled a commemorative plaque to honour of the visit of Cardinal William Levada to his great-grandmothers home-place in Kilcorney on Easter Sunday 2008. The unveiling happened after 10:30am mass which was celebrated by Fr Winter and concelebrated by Monsignor Mulcahy (an uncle of Donie Howard), and the unveiling was performed by Aiden Horgan, a relative of Cardinal Levada.

Monsignor Mulcahy gave a very interesting sermon which detailed Cardinal Levada’s (the Pope’s right hand man)  life, how he ministered with him in Santa Monica (California), and how he rose to his current position of Prefect of the Congregation for the Doctrine of the Faith. He also talked about his great-grandmother Kate Horgan who had emigrated across the Atlantic all those years ago from Horsemount, and crossed the USA and settled in California.

A large crowd gathered outside St Nicholas Church immediately after the mass for the unveiling of the plaque (which is on the side of St Nicholas Church facing the grave) by Aiden Horgan. It was blessed by the priests, Marion Horgan thanked all those involved for the foresight and for organising the day. Aiden Horgan thanked everyone for the honour, and Briget Daly told of how the Duhallow Choir (and especially Tom Goggin) organised and met Cardinal Levada in the Vatican Gardens in Rome a few years back, and invited him to his ancestors homeplace in Kilcorney. Afterwards there were refreshments for all in the adjoining hall.

1 thought on “Unveiling in Kilcorney”