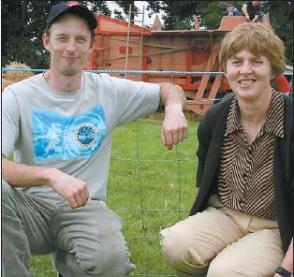 For any outdoor event the weather makes all the difference, and this year the sun blazed down in Cullen for the hosting of the 12th Old Time Threshing and Vintage Afternoon, we were blessed with brilliant summer sunshine that lifted the spirits of all who attended “the Threshing” as well as honouring our own patron Saint – Laitiarain. Incidentally it was also Macra’s “Know your neighbour Weekend”.

The vintage enthuastics arrived early on the day, many having travelled long distances to display their rare items, which ranged from small hand operated equipment to large motorised machines, tractors, many lovingly restored to their original condition, beautiful vintage cars, motor bikes etc. all gleaming in the sparkling sunlight.  P.J.Murphy‘s 36” Garvie hummed like a new one and was driven by Pat O’Keeffe‘s 1945 Fordson Major TVO. The vintage Parade later in the afternoon was the highlight of the day, as each exhibitor received a special brass plaque.

The afternoon was also a great family day out, with plenty of entertainment, including numerous side shows – children’s sports,  sheep dog exhibition, tractor competitions, climb the ladder, Penalty kick, Driving the Nail, Sweets Count also Beads Count as well as guess the number of logs in trailer, Face Painting and raffles.

It being Laitiarain Sunday we had a feast of wonder music – Cullen Pipe Band followed by the hugely popular Mike, Helen and Southern Pride.

The Ladies Committee were on hand with welcome cups of tea and snacks for all exhibitors and helpers to revive the spirits. They are to be complimented and admired for their catering skills.

Volunteers are the lifeblood of any community and their involvement contributed immensely to the success of the day, it was a day where people worked together for the good of the day. It was an opportunity for local people to meet their neighbours, as well as friends and visitors that they meet each year at this annual day out.

A glowing  tribute must be paid to all who contributed to the success of the day in any way, our wonder sponsors including, Cullen GAA and  Pat Quinn, for the provision of this excellent site,  Mc.Carthy’s T.V. who provided a T.V. for the GAA followers, Southern Pride, The Media, Corkman, C 103 ,Clara News and all who displayed our posters, John Tarrant, Sean Radley, Phil O’Sullivan, Eily Buckley,  Sheila Fitzgerald, Hannah O’Connor, John Anthony for amplification, Dan O’Riordan, Munster Joinery, and those who contributed anonymously. We are so grateful to you all in spite of the challenges of the current economic climate.

To all our Gate Stewards, parking Stewards, Side- Show operatives, Sponsors, and all who contributed to the success of the day we say –