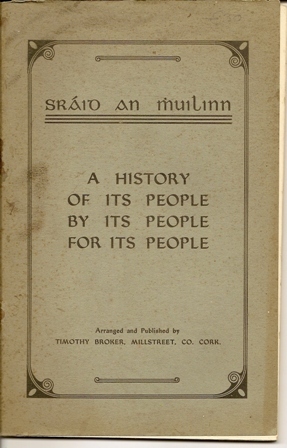 Sráid an ṁuilinn [Millstreet, County Cork, Ireland] A History of its people by its people for its people. Part 1. Arranged and published by Timothy Broker, Millstreet, Co. Cork., no date, c.1930s.

Millstreet museum currently has a copy of this publication, as do some private residences locally, and there is a copy in the National Library of Ireland

Timothy Broker is a pseudonym, as it was actually written by Fr. William Ferris, a curate in Millstreet in the 1930s, who had a previous publication blocked by the Bishop of Kerry, so he used the pseudonym to get around this. He devoted himself to recording oral history and folklore in danger of going to the grave; as he put it, “Each time the east wind blows, it takes an old seanachaí with it”.

Apparently it was compiled from information gathered at Station Masses, It is a comprehensive list of the antiquities of the area.  [2: Origin and Development of the Parish of Millstreet]

He is not to be confused with Fr. Owen McFineen Ferris who was Parish Priest of Drishane around 1700, and whose church was the old one in Ballydaly, about 250m south of Croohig’s cross. [2]

The book was reviewed in 1837 by the Cork Historical and Archaelogical Society. See the review here:

Sráid an Mhuilinn. A History of its People, by its People, for its People. Part I. Arranged and published by Timothy Broker, Millstreet, Co. Cork. Price 2s. net.

This booklet (of 56 pages) is, perhaps, a sign of the times. Its compilation is a sign that one man is interested in the history of his locality ; its publication is an indication of the author’s optimistic outlook that many others are sufficiently interested to be readers of the information he has brought together. We sincerely hope Mr. Broker’s optimism is justified and we wish the booklet every success. The sub-title is misleading. The booklet is not a “history ” of the parish ; it is, what is much more valuable, a survey of the archaeological remains in it : fulachta fiadh, megaliths, standing stones, holy wells, forts and souterrains, as well as some other finds and miscellaneous monuments. A book of this kind must not be judged by the same standards as one by a recognised authority on history or archaeology. Its faults are obvious, but it is, nevertheless, a very useful compilation and of value not only to those who live in the Millstreet area but also to those caring for Irish archaeology, wherever they live. The specialist will find in it some items of interest, e.g., the note on the finding of a bronze axe in a fulacht fiadh at Baile na Tona (p.11). It is further of considerable value to have as it were a statistical summary of all the remains of antiquity in a particular area, especially since so many of the remains are not so outstanding as to be noticed in archaeological literature generally and belong to the less ” respectable ” side of archaeology. The townland names are given in Irish. This is excellent, but, when unaccompanied by the Ordnance Survey Map form, leads to one inconvenience. The official map spelling of the name may be quite at variance with local pronunciation and philological accuracy, but it is the only one which the worker unacquainted with the district can use in order to find the name in the townland census or on the map. We therefore feel that the official names might have been inserted either in brackets under the Irish forms or as an addendum. Booklets of this kind are frequent in France. The author may be the local teacher, abbe or local official, and they vary much in excellence, but almost all are of use because they are local in their treatment. It is to be hoped that we shall have more of such work in Ireland. We conclude this review by a quotation from a passage (refreshing, whether we agree with it or not) in Mr. Broker’s Foreword : ” I like parish history. It is the best antidote for, as it is the antithesis of the daily newspaper, the latter focusing all space on one small point of time and making, in my opinion, for ignorance and savagery, and the former focusing all time on one small point of space and making for knowledge and civilisation.”