Millstreet delivered a terrific display of passion and pride to lift the Co. U14 B Hurling Championship title after overcoming Ballinhassig 2-15 to 3-4 in Blarney last evening.

Laced with surperb skill and brilliant touches, Millstreet allowed their hurling do the talking over the hour. Indeed a highly motivated Millstreet took control of the proceedings from an early stage and availed on the accuracy of Seán Óg O’Connor and Thomas Walsh to shoot pointed frees.

Ballinhassig managed to find their footing and a goal cut the arrears 0-7 to 1-2 at the break. Three Millstreet points upon the resumption were cancelled out by another Ballinhassig goal. With the game in the melting pot, Millstreet held a facility to step up a gear where their speed and first touch hurling put Ballinhassig on the back foot. 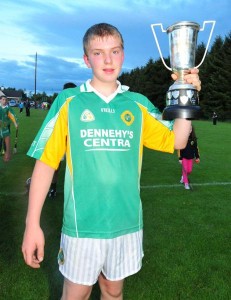 Crucially two opportunist goals in as many minutes from   Seán Óg O’Connor put daylight between the sides. And while Ballinhassig threatened a revival, the entire Millstreet side stood up to be counted on a county final stage to confirm their ambition to secure a rare county hurling title.

Team captain Ryan Tarrant accepted the championship trophy much to the delight of supporters who saluted their heroes.