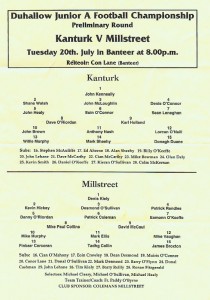 Millstreet had a hard fought victory in the Duhallow Junior Football Championship after their superior fitness saw them hold out for a two point victory after extra time in Banteer tonight.

Kanturk looked by far the better team in the first twenty minutes and they led by six points to two, but Millstreet came into it, scoring four unanswered points before the teams traded points to leave the half time score at seven points apiece.

Kanturk began to dominate the second half but failed to turn their posession into scores as the Millstreet defence did well under pressure not to give away frees in dangerous positions, while the Kanturk forwards squandered a good few chances. The Millstreets forwards were starved of decent posession with which to score as the play constantly broke down once it passed midfield.  Five minutes remaining and Kanturk scored a couple of points and led by 11 points to 9, before the Millstreet line made switches which began to tell and a pair of last gasp long range points in injury time pushed the game into extra time.

Extra time now and the light was fading. No sign of the floodlights coming on as Kanturk started brightly scoring two points, before Millstreet replied with another two points which saw them level at the break. In the second half of extra time, Kanturk were visibly tiring and Millstreet making the most of the fresh legs on their bench, began running hard down the middle which paid dividends. A rousing point by Mark Ellis put Millstreet into the lead for the first time in the match, and it was quickly followed by a neat poing by James Broxton. Five minutes to go and a Kanturk midfielder saw the line for a second yellow. Yet Kanturk pushed on, but couldn’t get the goal they needed as they pushed everything forward.

The final whistle brough relief as Millstreet live on for another day, but they will need to improve if they are to progress further.