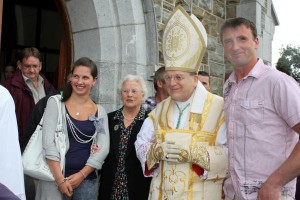 At 5pm on Thursday, 8th July 2010 in the Church of the Blessed Virgin Mary, Cullen,  concelebrated Mass was celebrated with, as the main celebrant, Archbishop Raymond Leo Burke who not only has been the Archbishop of St. Louis, U.S.A. but is now one of the most high-ranking prelates in the Vatican. On June 27, 2008, Pope Benedict XVI appointed Archbishop Burke to the office of Prefect of the Supreme Tribunal of the Apostolic Signatura, a position equivalent to that of Chief Justice of the United States Supreme Court, or President of the Conseil d’Etat of France. As such, immediately after the Pontiff, Archbishop Burke holds the highest judicial office in the entirety of the Roman Catholic Church.   His court, as the final possibility for most all appeals unless they go to the Pope, ranks higher than the Rota or the Apostolic Penitentiary. In terms of the importance of his Curial post, Archbishop Burke is the second-highest ranking American prelate at the Vatican after  Cardinal William Levada, who took Pope Benedict’s place as prefect of the Congregation for the Doctrine of the Faith.   And, as you may well recall, Cardinal Levada celebrated Mass in Kilcorney Church on a recent Easter Sunday.    It was Tom Goggin who very kindly alerted us to that Kilcorney visit a few years ago.   So having two such direct links to the Vatican with such close connections to our area is truly quite phenomenal.   Here we share images of the Archbishop’s Culllen visit where he was truly delighted to meet with relatives (among whom were the Cremin and McSweeney Families as well as others) and Friends.   Fr. Paddy O’Byrne knew the Archbishop in U.S.A. and we thank Fr. Paddy and also Photographer, Sheila Fitzgerald for alerting us to the visit.    William Fitzgerald and I recorded an LTV2 interview with the wonderfully obliging and cheerful Archbishop. (Seán Radley for www.millstreet.ie )

2 thoughts on “Archbishop Burke in Cullen”