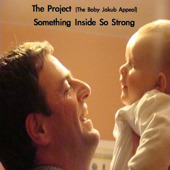 “Something Inside, So Strong” the charity single by the Project in aid of Baby Jacob was officially released by iTunes yesterday morning, and is now available for download worldwide. It will cost you just 99 cent (or your local currency equivalent), with all proceeds going to Jacob!!

So go and download it from iTunes. It’s for a great cause.

Nine-month-old Jacob Nowak was born in Millstreet, Co Cork. The youngster, whose Polish parents Mariusz and Wiola moved to Ireland in 2006, was born with an extremely rare condition, called Anophthalmus.

As a result his eyes never formed in their sockets before birth. Anophthalmia affects fewer than one in 100,000 children but, in Jacob’s case, it left him without eyeballs or optic nerves. Up to the age of seven he is expected to undergo surgery an average of four times a year.

Jacob and his family must fly to Germany for the treatment, taking place at the world renowned Rostock Eye Clinic.

Without the surgery, his skull and face will not develop correctly, and he would face painful and permanent deformities.

As part of the fundraising effort for the huge cost of this treatment, The Project, a Cork-based musical group, has recorded the Labi Siffre song, Something Inside So Strong, in aid of the Baby Jacob Fund.

Rose O’Neill said she first became involved in the project when the plight of baby Jacob was highlighted by the media.

“I thought what can I do – can I do anything? So I started a Facebook page for Baby Jacob. So I thought let’s get a single together.

Jacob is growing normally and he is absolutely beautiful. He has a wonderful family and the community in Millstreet have gathered around them so well. He is going back to Germany on the sixth of June for his third operation in nine months. It is going to be ongoing until he is seven.”

The song was produced by Freedom Creative Music, at the Half Moon Bridge Studio complex in Cork.

* For details of Nowak’s fundraising efforts for Jacob or if you would like to donate towards his treatment, go to www.babyjacob.ie