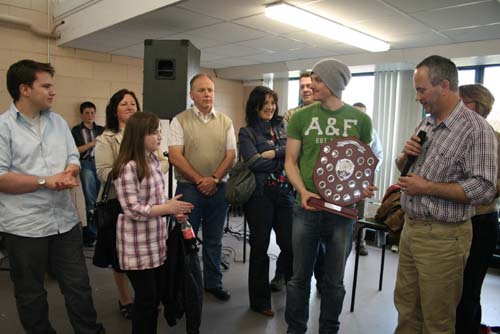 The Annual Millstreet Féile Cheoil was organised by the Millstreet Branch of CCÉ (Comhaltas Ceoltóirí Éireann) and held at Millstreet Community School on Sunday, 18th April 2010. During that evening a special tribute was paid to the late Stephen Carroll who had been  a dedicated Judge at a number of Féile Cheoil events but who sadly died at such a young age since last year’s event.   Stephen’s parents, Michael & Sheila as well as family members, Adrian & Sinéad from the Kilcummin/Gneeveguilla area were present to witness the presentation of the new Stephen Carroll Shield for Button Accordian to Damien Mullane who was this year’s Judge in that competition.   It was James Linehan and Michael O’Riordan of Millstreet CCÉ who organised this special and lasting tribute to the late Stephen.   Stephen had always been such an obliging, talented, welcoming and sincere Friend to so many.   We include a picture (taken in the hospitality room)  from Millstreet Féile Cheoil 2009 (19th April) where Stephen is seated first from left.   Ar dheis Dé go raibh a anam uasal. (Seán Radley for www.millstreet.ie).

More photos and a tribute to Stephen are below:

Below is an article from the Kingdom newspaper on May 28, 2009

TRIBUTES have been paid to a gifted young Killarney musician who died following a road traffic accident in Kilcummin last Saturday week.

23-year-old Stephen Carroll from Maulykevane, Headford died on Wednesday last, four days after a freak early morning crash at Anablaha, on the Kilcummin to Gneeveguilla road.

Tributes were paid to the Limerick Institute of Technology engineering student by friends who attended the removal and funeral Mass to express sympathy with Stephen’s heartbroken family.

Our Lady of the Holy Rosary Church in Gneeveguilla was packed as mourn-ers gathered to say farewell to a young man known in Irish music circles as an accordion/melodeon virtuoso.

His uncle, Fr Dan Carroll, celebrated requiem Mass for Stephen and he was laid to rest beside his brother, Gearóid, in Holy Cross Cemetery in Kilcummin.

In a moving eulogy, journalist Aidan O’Connor, who was his close pal, described Stephen as a person from whom the world had learned so much.

Stephen’s father, Michael, thanked his son’s friends for all of their help and compassion in the days following his accident. Concluding his short address, Mr Carroll told the congregation that his family’s hearts were broken following Stephen’s untimely death.

The Church in Gneeveguilla echoed to the strains of Irish hymns and music and song performed by Stephen’s friends from Comhaltas Ceoltóirí Éireann. Following the Mass and lining the route to the cemetery, pupils from Stephen’s former schools formed guards of honour.

The young Headford man had regularly played at sessions in and around Killarney town and further afield. He featured prominently at the Gathering Festival and the Spraoi Chiarraí summer performances in the town.

Born in Sliabh Luachra, famous for producing Ireland’s greatest exponents of traditional music, Stephen, an All-Ireland-winning accordion player, through his involvement with Kilcummin Comhaltas and Glenflesk, passed on his passion for music through teaching individuals and groups.

Even going through their darkest days, Stephen’s family generously donated the organs of their late son so that others could benefit.