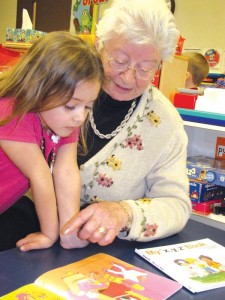 YORK — “God and His mother be with you all my friends.”

So Eily Buckley conveys her greetings, in Irish Gaelic, to her listeners during her weekly radio report from Millstreet Town, County Cork, Ireland.

Eily has been in Nebraska since St. Patrick’s Day. She will be in York County a short while longer, before heading to Lincoln next week to celebrate her cousin’s Diamond Jubilee in the priesthood. Father Paddy O’Byrne, now  retired from the Diocese of Lincoln, is the link between Eily and her rural Bradshaw hosts, Elizabeth and Terry King, and Toni and Kent Allen.

When the Kings and Allens wanted to travel to Ireland last year, Fr. O’Byrne pointed them to Eily’s bed and breakfast in Millstreet, a town of about 1,400 people in northwest County Cork. About another 3,000 live in the surrounding countryside.

The Nebraskans soon counted Eily among their friends, and welcomed her when she flew to Nebraska with Fr. O’Byrne.

from the York News Times

Eily visited Elizabeth King’s preschool classroom at St. Joseph School, and in the company of Toni Allen she  introduced herself to third and fourth grade students at Heartland Community School in Henderson.

Eily also took some time to share her observations about Ireland and her travels.

Of her time in Nebraska, Eily says, “It’s been great. Oh, wonderful!”

Noting the drab late winter landscape, she adds, with an Irish lilt, “If everything was beautiful, I mightn’t see the beauty of the people.”

Her hosts have taken Eily across eastern and central  Nebraska, and everywhere, Eily has been impressed by Nebraskans’ friendliness.

She is also a little startled by how native Cornhuskers take for granted the long expanse of open plains between populated areas. By comparison, all of the Republic of Ireland is about the size of West Virginia, or about one-third the size of Nebraska.

“I couldn’t believe it when Lizzie said she would  drive 200 miles to pick me up from the airport,” Eily exclaims in her Irish brogue.

Eily’s R’s seem to roll underneath themselves as she  says them. Her vowels open up in ways unexpected by the American ear; words like “important” sound like “impartant.”

In Millstreet, she says, people walk to the shops and local services. Eily runs her Gearoroe B&B in her own home, a little outside of town. She recalls many happy years nearby, living on Kilmeedy Castle Farm with her late husband, Dan.

The remains of Kilmeedy Castle, built in 1436 as a stronghold on the  mountain pass between Cork and Kerry, still hold ground near the original farmhouse now occupied by Eily’s grandson.

“It was always turned up to the rising sun,” Eily says of the old castle. “It was lovely.”

When Eily and Dan lived on the farm, they supported themselves by milking 28 Friesian cows, selling the calves and raising pigs. The chickens were Eily’s domain. She enjoyed their melodious clucking as they scratched about the yard.

“’Twas the done thing in Ireland long ago,”she says. “Hens were the women’s thing.” Eily sold the eggs in town for “a little pin money.”

She wrote a little poem, once, remembering the farm:

Fifty acres was all we had

And some of that still rough.

But with Dan as leader of the clan,

We always had enough.

Change began to intrude itself not long after 1973, when Ireland joined the European Union, or “EC” (European Common Market), as Eily refers to it.

Women could no longer sell in the shops the traditional cakes they had  baked in their own kitchens according to recipes handed down by their mothers and grandmothers.

The Buckleys could no longer sell their milk, cream and  eggs without violating EC regulations. The hens had to be locked up against regulatory fears of them spreading tuberculosis to the cattle.

The Buckleys eventually left the farm to their son and grandson, and built the house close to town. Eily had to take a job driving a bus. She remembers the  exact amount of her first paycheck: 12 pounds, 9 shillings, about $53 today, for a week’s work.

But it was a job. Around this time, the 1980s, Irish were leaving Ireland again, just as they had during the time of the Great Famine of the mid-19th century, when the potato crop failed, and for about the same reason: they  were hungry. The country was in an economic recession, and jobs were scarce.

In some respects, Eily says, Ireland was paying then for its failure to change earlier in the early 20th century. Many of the people leaving then, she says, had “not much more [education] than they had back in the Famine times.”

Membership in the EC, she concedes, significantly improved the country’s infrastructure and eventually brought more and better-paying jobs than ever before in Ireland’s history. The Irish could stay home, and prosper.

“I guess we couldn’t afford not to join [the EC],” Eily says, “but we paid a terrible price and we’re still paying it.

“We’ve lost a lot of identity. We belong to Europe now, we don’t belong to Ireland.”

About 35 years ago, she began writing a magazine column, “The News from Cloghoula,” relating the news about home to those who had left. She named her column after a nearby country school district.

It was “maybe not more than a mother would put in a  letter,”Eily says, but Millstreet area and County Cork natives now living elsewhere appreciated it.

Then she began doing the same kind of report on a local radio program. In six minutes, “Newslink” reader Eily shared with her listeners all the little things that make a town a community, news about fundraisers for local causes, scores from local sports, local church events, concerts given by local people in local pubs and halls.

Every Tuesday, she opened her show, “Dia is Mhuire diobh go léir a cairde,” greeting her listeners in their Irish Gaelic  tongue.

They loved it. Recently, Eily broadcast the one  thousandth show.

Then she added television to her repertoire. On “LTV2 Millstreet,” Eily tries to highlight the activities that interest young people, throws in crafting projects once in a while, and includes news from nearby villages.

Sometimes, the TV show reaches two hours long. It is broadcast on Thursday nights and repeated on Sunday nights.

“It is terribly popular,” Eily says, and adds that it is so because many country people are home to watch it. They dare not go out and socialize at the pubs, like they used to, Eily says, because strict laws discourage people from  driving at all if they might have even one drink.

Eily doesn’t endorse drunk driving, but, she says, “[The government] gave them nothing in return. No public transport. They’re just dying of loneliness at home.”

Still, she has fun with everything she does.

She  helped raise money to buy equipment for the local TV station by driving her bus, a 45-seat automatic Mercedes, in reverse through 12 towns in the region.  Crew members drove the bus legally — and swiftly — over the roads between the towns, but Eily took the wheel and maneuvered the vehicle backwards through the narrow, twisting streets of the towns.

More crew members ran alongside with buckets, collecting donations from admirers. In one day, they brought in the equivalent of about $10,000.

Eily was 76 years old at the time.

Eily credits Dan for all she has accomplished. He encouraged her at every new undertaking.

She looks away when she speaks of him, seeing a different  lifetime, and the man she loves.

“He  was a big, beautiful, quiet man,” she says. “He had a lovely way of bringing out the best in me, without me ever noticing.”

Echoing her poem, she says, “We had no riches, but we  always had enough.”

Eily will take a fresh understanding of Ireland and the Irish home with her when she leaves Nebraska. She was moved by a trip to Greeley, and the Church of the Visitation of Mary at nearby O’Connor.

Streets in Greeley bore the names of Irish counties. Names on the stained glass windows of the church commemorated the Irish families who had donated them: Murphy, Mulcahy, O’Connor.

Inscriptions on grave stones in the church cemetery  testified to the difficult lives these Irish immigrants lived in America, in many ways as difficult as that they had left behind in Ireland.

Eily says in some written notes about the visit:

“My mind flew back to the stories told by my elders of the American Wakes. They were parties that were held in the homes of young boys or girls who were about to board the emigrant ship next day, from all parts of Ireland, bound for the ‘New World.’

“The  reason that those parties were called ‘American Wakes’ was that those impoverished parents were never to see their son or daughter again, never hear the sound of their voice again, so that in a way they were dead to their beloved people . . . .

“These were the thoughts that were going through my  mind in that little chapel. I was picturing . . . those poor souls who knelt there a hundred years ago, brokenhearted, insecure, and lonely.”

Eily herself is sad about the decline of the Church in Ireland. Television, she says, has become more important in the lives of most people. The strong spiritual life of York and the surrounding area makes her feel good.

“They love their religion here,” she says. “You wouldn’t see that at home.”

Eily will fly back to Ireland, and Millstreet, after the Chrism Mass and Fr. O’Byrne’s celebration on Monday, March 29. She has been treated so well here in Nebraska, she says, “How’m I going to back to being ordinary me when I  leave?”

May God and Mary bless you, Eily: Go mbeannaí Dia is Muire duit.