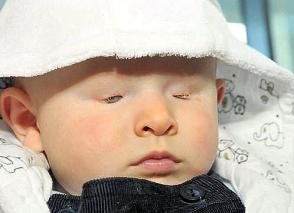 THE parents of a little boy born without eyes have launched a desperate plea to help raise €300,000 for his treatment.

Jacob Nowak suffers from an exceptionally rare condition whereby his eyes never formed in their sockets before his birth.

The condition, anophthalmia, affects fewer than one in 100,000 children but, in Jacob’s case, it left the him without eyeballs or optic nerves.

Jacob, who was born last August, is healthy in every other respect but now faces years of treatment to cope with his condition.

He has to be fitted with special socket extenders and prosthetic eyes to prevent his face from gradually collapsing in on itself.

Jacob’s parents, Mariusz (29) and Wiola (29) Nowak, are Polish nationals who have been living and working in Millstreet, Co Cork, since 2006.

The couple have now exhausted their meagre savings paying for Jacob’s initial course of treatment and they are desperate to raise the money to allow for his specialist treatment to continue. Funding is not currently available from the HSE.

Wiola said the family are desperate to do everything they possibly can for Jacob. “When I was pregnant, as far as we knew, our baby was absolutely perfect. We had no idea about this. We cried tears of joy when we discovered I was pregnant with our second child,” she told the Irish Independent.

“Jacob was born and when they put the baby on my belly I was so happy. But after a little while I heard one of the midwives saying, ‘The baby won’t open his eyes.’ I thought his eyelids must have grown together but believed the doctors would fix it. Then I looked at the nurses’ faces and I knew it was something much worse.”

Poignantly, when the couple’s five-year-old daughter Pola was told that her new brother was blind, she told her parents: “Don’t worry, I will help him to cross the road.” Mariusz and Wiola began researching the condition and discovered there was a clinic in Rostock, Germany, which specialised in its treatment.

“The last operation Jacob had in November was to put in hydro-gel extender implants to allow for the development of his skull and eye sockets. The next operation will be later this month,” Mariusz explained.

However, Jacob could ultimately require a number of further procedures over the space of up to seven years and the total cost of his medical treatment could exceed €300,000.

The family has established the Baby Jacob Trust in Millstreet, Co Cork.