The death has occurred on Wednesday, February 03, 2010 of Kathleen (Kitty) O’SULLIVAN, (née Daly) of 19 O’Neill Crowley Terrace, Mitchelstown, Cork and formerly of Millstreet.
Reposing at O’Brien’s Funeral Home, Mitchelstown on Saturday evening from 6pm to 8pm, with removal to Mitchelstown Parish Church. Funeral Mass on Sunday at 12 noon. Burial afterwards in the adjoining cemetery. 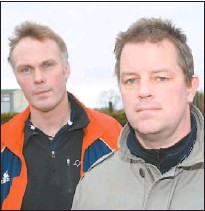 A KISKEAM builder and a Millstreet butcher are planning to make a return trip to Haiti in April to help with the relief effort in the earthquake-stricken country.

John F O’Connor from Kiskeam and Jerry O’Leary from Millstreet were in Haiti last October when they took part in the Haven house building project. Both Duhallow men have also been to South Africa on a number of occasions with the Niall Mellon Trust.

The two men, who would have met many times on the playing field, were greatly taken aback when the horror of the earthquake unfolded. They now want to return to Haiti in April to help by providing much needed housing.

They are now working to raise funds for their relief effort and to kick start the fund-raising they will be holding a number of events in the next two months and would greatly appreciate any help from the community.

Photos from Kippagh, Ballydaly, before, during and after the big snow. (pics by Geraldine Dennehy)

from Airtricity (full details at http://www.imbolc.ie):

Saturday, Febrary 6th will see ten of the most original and innovative thinkers in Ireland gather in Ballyvourney, Co. Cork, to give a day of talks on the ground-breaking projects they are working on. The name of the conference is “Imbolc”, and perhaps the most innovative facet of the whole event is that it is taking place entirely through the medium of the Irish language. It is being run on a non-profit basis, and all the speakers and organisers are volunteering their time for the event.

END_OF_DOCUMENT_TOKEN_TO_BE_REPLACED

There is concern for the jobs in the chocolate crumb producing plant in Rathmore, as the implications of Kraft’s $13 billion takeover of Cadburys come into focus. It appears that Kraft want to strip away any excess cost, which could see the end of the Cadbury plants in Ireland. There are a number of Millstreet people who work in the factory.

The below story appears in the Irish Examiner 4-Feb-2010

—— The Story ———–
Workers at the Cadbury plant in Rathmore, still do not know if the takeover of the company by US food giant Kraft will affect their jobs.
Last year, SIPTU agreed to rationalisation proposals resulting in the loss of 28 jobs in Rathmore. The plant now has a workforce of around 80.

Cadbury Ireland Ltd employs almost 1,600 people, including 1,100 at its plant in Coolock, Dublin, and the remainder at plants in Tallaght, west Dublin, and Rathmore.

Chocolate crumb, a basic ingredient of Cadbury’s internationally known chocolate bars, is produced in Rathmore and …….. (see the Irish examiner for the full story)

A MILLSTREET company will represent Ireland at the upcoming 2010 European Transport Company of the year awards in Amsterdam.

The awards are considered the Oscars of the transport and logistics industry with companies from across Europe competing.

K&L Deliveries, which is a Kerry member of TPN (The Pallet Network), has been in operation since 1986 when MD Gordon O’Keeffe and his wife Breda started off their business with two trucks. Now the company operates from a 60,000 square foot warehouse and have more than 35 trucks on the road.